The New York Comic Con was held October 10-13 at the Jacob Javitz Center in NYC.  To me, NYCC is an annual holiday that allows me to add to my growing collection of original comic book art.  When tickets went on sale over the summer, I had just missed out on purchasing my usual three day pass, but was fortunate to get individual tickets for Saturday and Sunday.  I had to make up for the lost day by tackling my wish list of artwork and the show, particularly Artist Alley, didn’t disappoint.

I arrived on Saturday about 30 minutes before the doors opened and was near the front of the crowd.  When the doors opened at 10 AM, I went directly toward Artist Alley, which for the second year in a row was located in its own section of the Javitz Center separate from the exhibit hall.

This year I decided to hold off on purchasing original art pages from published works in order to concentrate on obtaining sketches for the sketch book I started back in 2005 (some of them can be seen on my Comic Art Fans page).  This year’s NYCC boasted a great lineup of artists and I knew I would get some great additions to the sketch book.  I actually got an early start on Friday night when JHU Comics hosted a creator signing with New Paradigm for the new comics Watson & Holmes and World War Mob.  At the event, Rick Leonardi (Cloak & Dagger, Spider-Man 2099) added a great Spider-Man to my book.

I started Saturday by stopping by the The Artists Choice table to meet the great George Perez.  His work has been a favorite of mine since his work on The Avengers and The New Teen Titans in the early 80’s, and going into NYCC I had realized that although I’ve gotten sketches from George in the past, I didn’t have one in my sketch book.  George added this drawing of the Flash.

Saturday brought an unexpected surprise when Kevin Eastman (co-creator of the Teenage Mutant Ninja Turtles) provided fans with autographs and free sketches throughout the day.  I waited on line for about an hour that morning, but had to leave to get John Romita Jr. to autograph both my copy of Marvel: Five Fabulous Decades of the World’s Greatest Comics and my Captain America jam page (both were must-haves on my list).  I thought I had missed out on the opportunity to meet Eastman, but later that afternoon I had heard that he would be back to sign and sketch.  That second time around I was about 10th on line and got a great sketch of Michelangelo in my book and Eastman’s autograph on my NYCC badge. 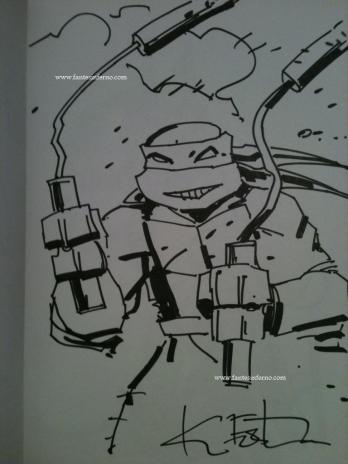 Adam Hughes is always high on my list for a sketch and I stopped by his booth first thing Sunday morning.  Twice a day, he provides quick marker sketches in exchange for donations to his favorite charity.  I was third on line and got this Batgirl sketch for the book. 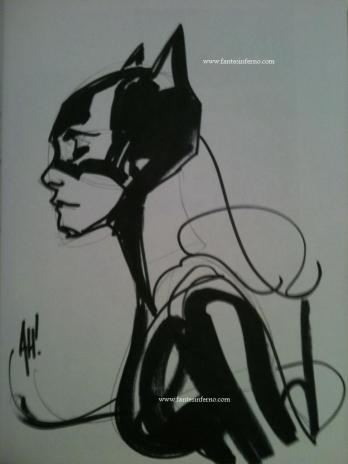 My final sketch of the day was from DC artist Ivan Reis (Green Lantern, Aquaman, Justice League).  In the past I had always been too late to get on his sketch list at NYCC, but he had time on Sunday for brush sketches and I was able to get this amazing drawing of Aquaman: 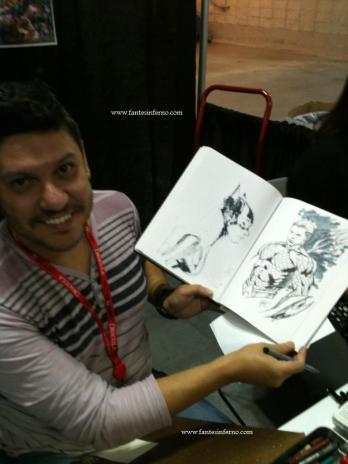 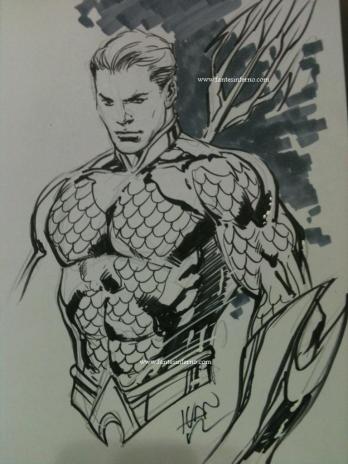 Other highlights of the weekend were chatting with legendary artists Klaus Janson (Daredevil, The Dark Knight Returns) and Jose Luis Garcia-Lopez (Batman, Jonah Hex, Superman) and meeting fellow comic art fans.  Overall the show was a great success and I’m already counting the days to the 2014 New York Comic Con.  As I walked out of the Jacob Javitz Convention Center Saturday night, I thought about how much the show has grown since the first NYCC in 2006.  I looked up and noticed the Empire State Building was lit up with the blue and red colors of Spider-Man’s costume.  The first thought that came to my mind at that moment was “Excelsior!”