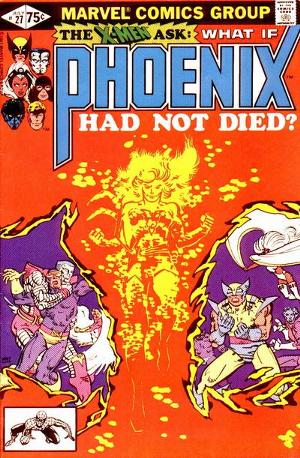 The early 80’s were my prime years of comic book collecting, and Marvel’s What If? was one of my favorite titles.  Each issue introduced by The Watcher would present an alternate history of Marvel characters based on one twist of fate in a previously established storyline.  There were some fantastic issues of What If? from 1981-1982, particularly What If Daredevil Became an Agent of S.H.I.E.L.D.? (#28, August 1981), What If Wolverine Had Killed the Hulk? (#31, February 1982), What If Elektra Had Lived? (#35, October 1982), and What If The Fantastic Four Had Not Gained Their Powers? (#36, December 1982).  I recently reached into the old box o’ comics and found one that stood out as one of my favorite issues of What If’s early 80’s run, and a story that truly stood out for me that entire decade: What If Phoenix Had Not Died? (#27, July 1981) written by Mary Jo Duffy with art by penciller Jerry Bingham and inker John Stuart.

We bought our copy of What If? #27 new off of the spinner rack at our comic shop back in 1981.  Frank Miller’s dynamic cover stood out among most other comics released that month, with his bold line work and the intense colors capturing Phoenix’s power while flanked by the helpless X-Men.

One of the reasons this story resonated with me was  because less than a year earlier Jean Grey/Phoenix was killed off in Chris Claremont, John Byrne and Terry Austin’s classic X-Men #137 (Vol. 1, Sept. 1980).  As I read that issue for the first time back in 1980, I held up hope that the X-Men would prevail in their battle with the Imperial Guard.  But as their epic battle ended with each member of the X-Men taken down in defeat, Jean’s death was even more shocking.  At that young of an age, I couldn’t understand how the folks at Marvel could have ended the story with the X-Men losing and a main character actually dying.  The only other comic book story to have that big of an impact on me was the death of Elektra in Daredevil #181 (April 1982), but unfortunately as I got older I became more jaded and skeptical with every Marvel character’s death and subsequent return.  That story in X-Men #137 got me more emotionally involved as a reader and fan of the X-Men, as Cyclops and the rest of the team came to terms with Jean’s death and dealt with their own issues as the decade went on.  To this day, I consider the Death of Phoenix one of my favorite comic book stories of all time and one of the greatest in Marvel’s history.  So when What If Phoenix Had Not Died? was published the following year in 1981, it was one of the stories I had to read.  X-Men was my favorite title and I was eager to find out what would have happened to them in this alternate history.

What If Phoenix Had Not Died? begins with The Watcher providing a recap of Jean Grey’s history in the original X-Men storyline (her transition from Marvel Girl to Phoenix, mind control under Mastermind and her time as the Black Queen of the Hellfire Club, the destruction of the star D’Bari leading to the deaths of 5 billion humanoids, and the X-Men’s fight with Lilandra’s Imperial Guard leading to her death).  Six pages in, the story takes an alternate turn when toward the end of their battle with the Imperial Guard Jean saves Cyclops from a blast and alters her destiny.  Jean and the defeated X-Men are taken to the Shi’Ar imperial flagship, and their psychic lobotomizer removes her telepathic powers.

Upon their return to Professor Xavier’s School, a now powerless Jean tries to adapt to her diminished role within the X-Men.  A distress call from Lilandra leads them to a showdown with Galactus and his herald Terrax.  The X-Men, led by Cyclops are on the verge of defeat against Terrax when the Phoenix force re-manifests itself in Jean and a blast of her power relegates Terrax to a powerless human form.  Galactus backs off and the old Phoenix is back.  But eventually the temptations of the Phoenix force get the best of Jean, and the story takes a darker turn.

No spoilers here.  Writer Mary Jo Duffy (Power Man and Iron Fist, Star Wars, Wolverine) and artist Jerry Bingham (Iron Man, Marvel Two In One) pack a lot of drama and action into What If Phoenix Had Not Died?: Jean’s emotional roller coaster as a result of her transition from mutant to human, the temptations of the Phoenix force when her powers return, and the ensuing consequences of the darkness that consumes her.  At a whopping 34 pages, this qualifies as an event and it doesn’t disappoint.  Even as a “done in one” single issue story, the shocking fate of the X-Men is darker than most other stories of that era and stays with the reader long after the last panel.

Nowadays our copy of What If? #27 has a worn cover and the middle pages are separating from the spine, which is a testament to how much we enjoyed this story.  Ten or twenty years ago I would have kicked myself for not bagging and boarding it, but the current condition brings out the nostalgia even more.  Turning through the pages the other night reminded me of quite a few lazy days at age 8 sitting on the living room floor reading and re-reading this issue, and brought back the same excitement and emotion as it did the first time I read it in 1981.

What If? #27 will be available in What If? Classic: The Complete Collection Volume 3 on Amazon and Comixology on 2/11/20.  As an Amazon Associate I earn from qualifying purchases.  Thank you for your support!

Tagged 1980's Comic Books, Comic, Comic Book, comic books, Jerry Bingham, Marvel Comics, Mary Jo Duffy, Phoenix, The Watcher, What If Phoenix Had Not Died?, What If?, What If? #27, X-Men