I wrapped up an incredible haul from 2010’s Big Apple Con and New York Comic Con with this amazing Captain America sketch from the great Jim Lee.  I uploaded a larger than usual image to show the texture and shading from the exposed pencil lines bringing out a darker mood in Cap’s expression.  This is an amazing sketch. 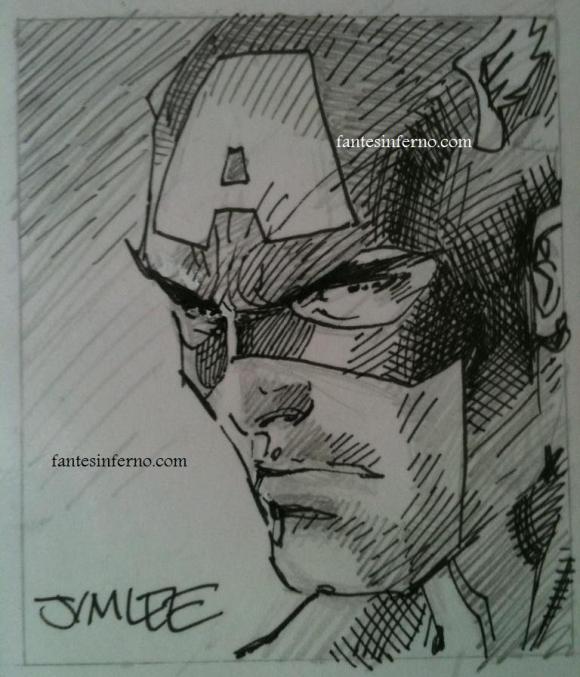 The New York Comic Con was held October 11-14 at the Jacob Javitz Convention Center in New York City.  This was my sixth time attending the show in the last seven years and I’m amazed at how much the convention has grown since the first NYCC in 2006.  If I remember correctly, that first NYCC was in a space no bigger than this year’s Artist Alley and was relegated to the lower level of the Javitz Center.   Now it takes up the entire convention center and it’s still barely enough space for the thousands of comic fans and cosplayers that attend.

NYCC started on Thursday but I had a three day pass beginning on Friday.  I left work early Friday afternoon and cabbed it to the Javitz Center.  There was a good crowd at the Javitz Friday afternoon, but despite the number of people on line the wait time to get in was minimal (on all of the three days I attended) thanks to the fantastic planning by the event organizers Reed Exhibition Companies. 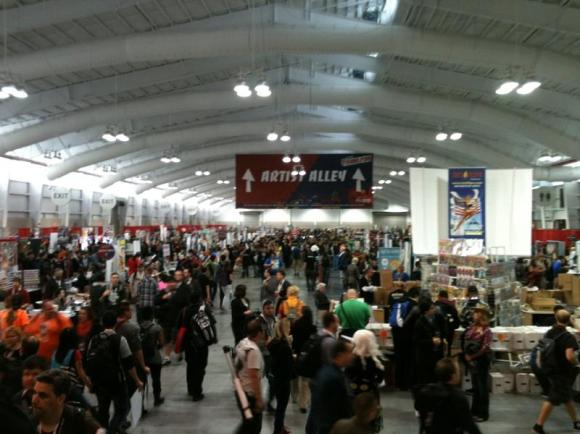 For me NYCC has always been about meeting the comic book writers and artists in attendance, particularly the men and women whose work I read from 1977-1989, and this show didn’t disappoint.  I had spent the week prior to NYCC looking over the list of comic creators that would be in attendance and putting together a list of who I would try to get sketches from.  My list ran down an entire page and would have cost me about a month’s salary if I was able to get all of the proposed sketches, so  I scaled it down to my “must haves.”

The first artist I met was Rick Leonardi, penciller of many Marvel titles including Cloak & Dagger, The Uncanny X-Men, and Spider-Man 2099 just to name a few.  I’ve been a big fan of his over the years, and at last year’s show I had commissioned a sketch of Cloak and Dagger from him that is one of my favorite pieces of art in my personal collection.  Lucky for me Rick’s sketch list wasn’t filled up yet when I arrived.  I asked for a Dr. Strange and he hit this one out of the park.  This sketch is definitely one of the highlights of my book.  He even added Kirby crackle! 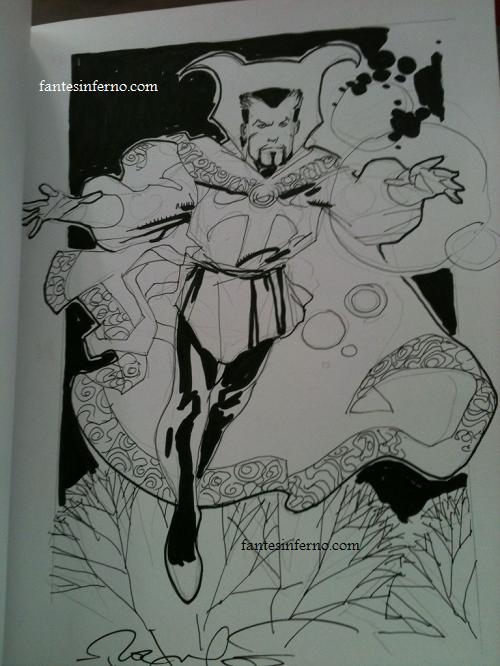 Next up was one of my favorite inkers, Bob Wiacek.  His run on The Uncanny X-Men with penciller Paul Smith in the early 80’s is one of my all time favorites.  I decided to get a Wolverine sketch on 11″x17″ comic art board based on Paul Smith’s amazing cover from Uncanny X-Men #173.  I initially asked Bob to draw Wolverine only with the intention of having another artist draw Rogue, but I quickly changed my mind and asked him to include Rogue as well for a full cover recreation.  He showed me the pencils on Saturday, which were AMAZING, and the commission will be fully inked and FedExed to me this week.  Needless to say, this will be the signature piece of my comic art collection.

Going into the show I had a Tony Daniel sketch on my wish list, and I was able to get not one, but TWO sketches from Tony on Saturday and Sunday.  First up was a sketch card of Poison Ivy, followed by a sketch of Harley Quinn in my sketch book.  Not only is Tony an amazing artist, he is one of the nicest people I have met in my years of attending comic conventions. 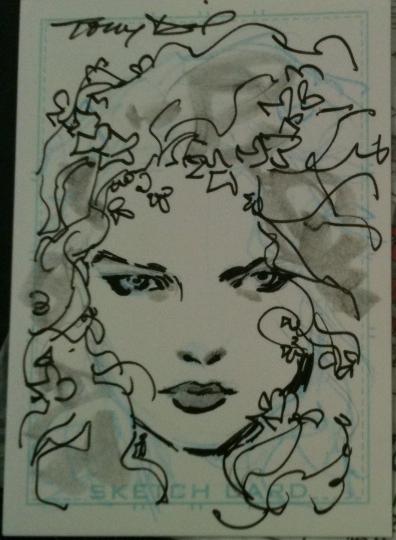 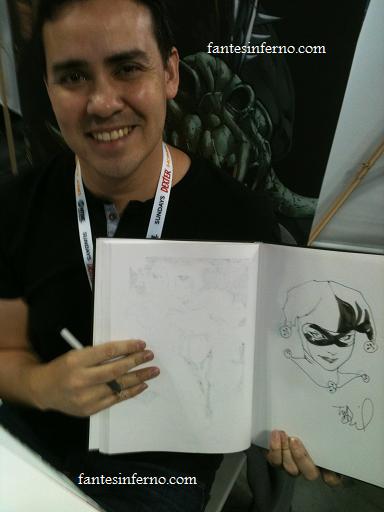 I was also fortunate enough to get this great Savage Dragon sketch from Erik Larsen.  The hits just keep on coming! 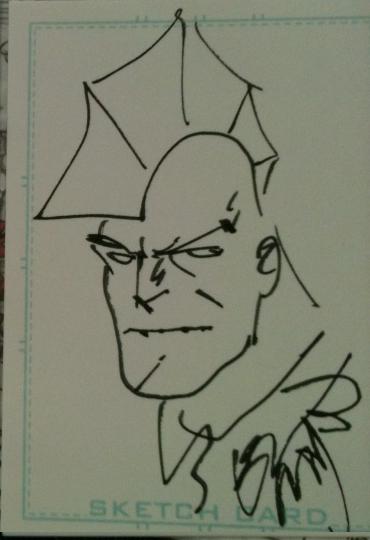 One of the highlights of the weekend was chatting with several of the creators in attendance about their work.  I have a copy of Marvel: Five Fabulous Decades of the World’s Greatest Comics by Les Daniels and decided to get the Marvel alumni in attendance to autograph the inside cover.  I walked up to Louise Simonson’s table for an autograph and was surprised to see former artist/editor Carl Potts.  I had a great conversation with both of them and mentioned to Carl that I’m proud the owner of a page he drew from Alien Legion #4 (inked by Terry Austin).  Bob McLeod was very generous with his time discussing the creation of The New Mutants (post to follow!).

I walked the exhibit hall floor a few times, mainly to check out the original comic art for sale.  I fully expected the number of attendees to peak on Saturday, but the show floor was also crowded on Friday and Sunday.  After awhile I decided to stick with Artist Alley.

I did buy one piece of published original comic art over the weekend, a religious themed page drawn by Rick Leonardi and inked by Joe Rubinstein from a story they collaborated on back in the 90’s.  I won’t give too much information on the piece because I’m hoping to write a blog post on it for the Holidays.  But I will say it was a page that I wanted to buy when I first saw it online, but never thought I would have the chance to purchase it.  Now it’s officially part of my “not for sale” collection.

I had a fantastic time at NYCC over the weekend and overall I thought the show was an amazing success.  This picture pretty much sums up for me: 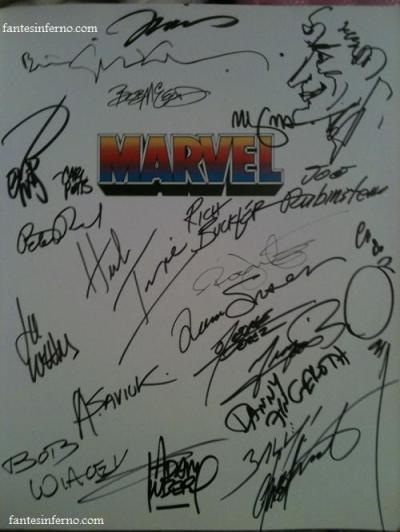 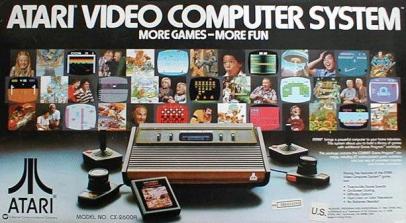 The  Atari 2600 game console, that iconic device that allowed us to play such arcade favorites as Space Invaders and Asteroids in our own homes, turned 35 on October 14th.  Along with the Commodore 64, this little machine helped define my youth in the 80’s.

The console was introduced in 1977, but we bought ours around 1981 in what was probably my family’s first case of “keeping up with the Jones’s.”  When we got home from school, we fired up the Atari and played until it was time to do our homework.  When we met up with our friends the only question was which house we were playing Atari in.

The 2600 came with the game Combat included in the box and our first game purchase was Space Invaders.  If I remember correctly, by pressing the Game Reset button while turning the power on, you were able to play Space Invaders with rapid fire.  Every other week or so my brother and I would go to our local department store’s video game section and browse for our next purchase.  Many of the Atari game boxes and cartridges had incredible painted artwork that could have easily been the covers to science fiction paperbacks. 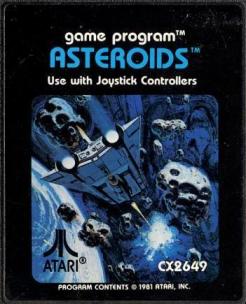 Looking back, the games we enjoyed the most were Missile Command, Asteroids, and my all time favorite Defender.  But the one game I played more than any other was Pitfall.  When I think back about the games we had at that time, I’m really puzzled why Pitfall took up more of our playing time than any other game considering it was much simpler in play and graphics.

To this day, I still prefer these older Atari games (and Commodore 64) to current video games.  A couple of months back, Microsoft and Atari released online versions of eight classic Atari games.  I couldn’t stop playing Asteroids the night I discovered this, and it made me want to break out the old 2600 again.  I still have our original console and game cartridges, but unfortunately the controllers didn’t make it past the 80’s.  One of these days I’ll have to buy a pair off of eBay and fire up the old machine for a game of Defender!

Growing Up On Italian Comic Books

Some of the most memorable and influential comic books of my youth were bought during my childhood trips to Italy.  I’m fortunate enough to return to Italy every couple of years for a vacation and each trip to a newsstand in Rome or the countryside brings back memories of me and my brother plunking down a few hundred lire (courtesy of my father) here and there on a copy of Sergio Bonelli’s classic long running Western comic book Tex. 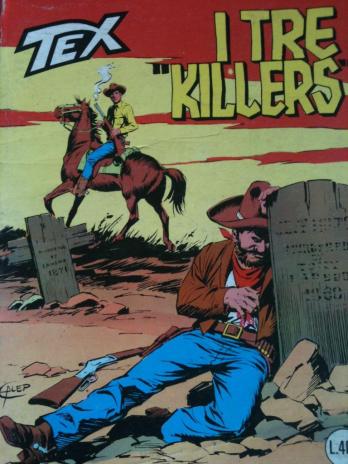 One thing I’ve always enjoyed about Tex is regardless of which decade I was buying the black and white digest, the art and writing has always been consistent, which is refreshing to see compared to books and characters that go through radical changes just to drum up sales.  Tex is a testament to how a publisher respects its characters and more importantly, its loyal fan base.

But our favorite Italian comic books were the super eroi, particularly L’Uomo Ragno and I Fantastici Quattro, who were none other than Spider-Man and The Fantastic Four!  Sure, we had been reading Spidey and FF prior to our first trips to Italy, but the Italian reprints we read in the late 70s were from Marvel stories originally published ten to fifteen years earlier and gave us our first exposure to the Silver Age artwork of Steve Ditko and Jack Kirby. 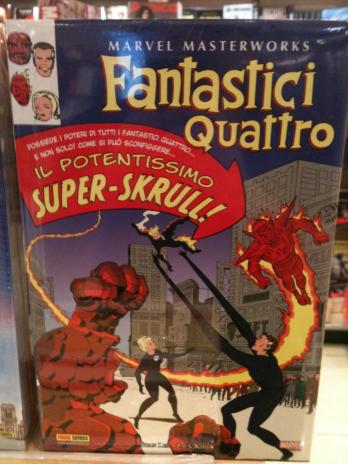 Lucky for us, the Silver Age was in full swing in late 1970’s Italy.  The Italian language seemed to add more drama and gravity to the dialogue, and the characters names even sounded cool when they were translated into Italian.  Dr. Doom was Dottore Destino!  The Thing was La Cosa!  The Human Torch was Torcia Umana!  The Eternals were Gli Eterni.  I wasn’t able to read Italian very well back then, but it didn’t matter because the clarity of the storytelling in Kirby and Ditko’s artwork allowed me to follow the stories without relying as much on the dialogue.

I wish I still had those old comic books.  I see a few issues of L’Uomo Ragno in eBay once in awhile, but I can’t afford the prices listed.  On my recent trip to Italy I was happy to still see Tex at all of the newsstands.  But when I stopped in a Hudson News in Milan’s Malpensa airport, I was even happier to see my old Silver Age Marvel favorites in the Italian language Marvel Masterworks. 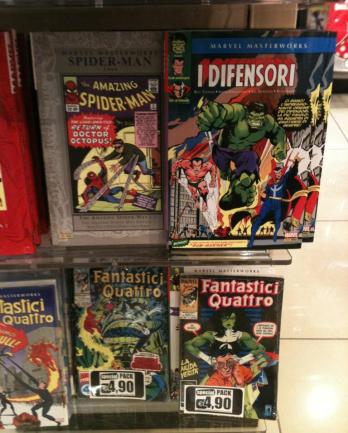 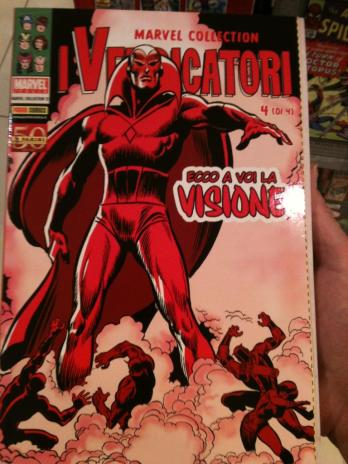 Like 35 years ago, I was reading classic Lee and Kirby stories with Italian word balloons.  And a new generation of Italian comic book fans could now appreciate the art of Ditko’s L’Uomo Ragno, Kirby and Colletta’s Thor, and be blown away by  La Visione on the cover of I Vindicatori (The Avengers).