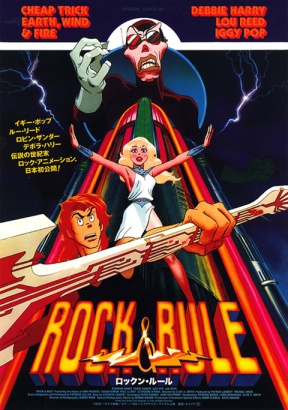 Rock & Rule is an animated film that I initially planned on including in my retrospective on the films of the Summer of ’83, but didn’t get to in time.  Although it had a theatrical release in Canada in August 1983, it had a very limited release in the U.S. but developed a cult following when it ran on cable TV.  It’s amazing how vividly I remembered Rock & Rule even though I only saw it once in my life prior to this week’s screening, and that was back around 1985 on cable TV during a marathon game of Dungeons & Dragons.  The details and the quality of the film stuck with me over the years, and each time I watch a traditional hand drawn animated film, I’ll measure it up against Rock & Rule.

The opening credits set the film’s tone as dark clouds part to the sounds of thunder, lightning and the heavy synthesizer of composer Patricia Cullen’s score.  As I watched this, my first thought was “Does it get more 80’s (in a good way) than this?”

Fading rock superstar Mok (who looks like he was modeled after Mick Jagger and/or Keith Richards) travels the world seeking the voice that will sing the Armageddon Key and open a doorway to the underworld.  He finds that voice in Ohmtown, where bandmates Angel, Omar, Dizzy and Stretch play an empty dive club.  Mok invites them to his mansion, drugs Omar, Dizzy and Stretch, and kidnaps Angel when she refuses to leave her band.  Angel’s bandmates snap out of it and follow Mok’s zeppelin to Nuke York to save Angel.

This film was better than I remembered, and what struck me the most about Rock & Rule when I screened it this week was how the film’s production hit on all cylinders.  The animation and photography of Rock & Rule combined classic techniques developed by Disney in the 1940’s with the state of the art computers available in the early 80’s.  But what’s most impressive is the level of musical talent associated with Rock & Rule.  Debbie Harry.  Lou Reed.  Cheap Trick.  Earth Wind & Fire.  Iggy Pop.  None of them could be accused of phoning it in for a cartoon.  They went all out in the songs they contributed, and their enthusiasm for the film is evident in the documentary The Making of Rock & Rule.  I only have one criticism of the film: the animation of the characters in the scenes in which they were singing had a lack of movement that took away from the energy of the music.

When I think of the animated films I’ve enjoyed over the years, several that immediately come to mind are Heavy Metal, American Pop, Watership Down and Fire & Ice.  As much as I still enjoy each of those films, Rock & Rule holds up better than all of them thirty years later.  It had great animation, a cool score, and a great soundtrack.  Unfortunately for all of this praise, the reality is that Rock & Rule didn’t find a theatrical audience due to lack of interest by U.S. distributor MGM.  But despite the lack if distribution and low box office, 30 years later Rock & Rule is still well crafted movie and a must see for fans of animation.