NYCC 2014: From Albuquerque to Artist Alley in Record Time 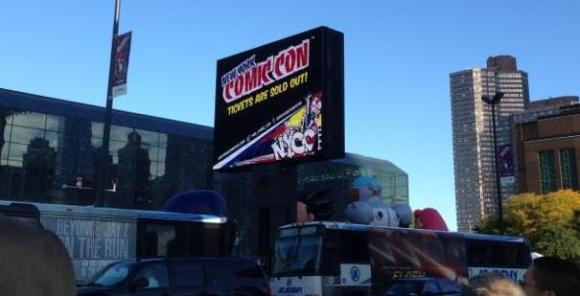 Since the first show in 2006, the New York Comic Con is the comic book related event that I look forward to the most each year.   I still can’t believe that only eight years ago it started as a one room event that took up a fraction of the Jacob Javits Center.  And while I tend to complain about the crowds in the exhibit hall each year, I am very happy that the show has grown in popularity into one of the premiere comic book conventions with an attendance (over 151,000 attendees) that has now surpassed the San Diego Comic Con.

I’ll admit I don’t take as full advantage of the show as most of the attendees do.  I don’t cosplay (though I am tempted to break out the stormtrooper armor each year), and I avoid the larger panels for the less crowded sessions, but that’s because I choose to maximize my time in Artist Alley to meet the creators that have written and drawn my favorite stories of the last four decades.  This year was no different but that was because I had less time at NYCC than previous years.  My faithful sidekick and I had set up a two week vacation in Arizona and New Mexico that overlapped the first three days of NYCC and I didn’t think I would be able to attend this year.  But when I found out we were flying the red eye from Albuquerque to JFK I knew that I could make the last day of the show.

While I may have missed New York Super Week and the first three days of NYCC, I made up for it by buying some comic related merchandise during our stop in Albuquerque.  First stop was the amazing Astro-Zombies comic shop where I got a great deal on copies of X-Men #90 and Fantastic Four #92.  I also found Days of Future Past HeroClix that sold out at my New York comic and game shops (Storm, Blob, Pyro and a Sentinel!).  If you’re ever in Albuquerque, I highly recommend a visit to Astro-Zombies.  They have a great selection of new and back issues and a friendly staff.  I also picked up a few Marvel Comics themed wall decorations at a local art store on sale.  Buying these items that I would have picked up at NYCC softened the blow of not attending the first three days (and probably saved me a few bucks!).  Heck, even the Albuquerque Hot Air Balloon Fiesta had a con feel with a huge crowd and members of the local chapter of the 501st Legion in attendance as the Darth Vader and Yoda hot air balloons ascended! 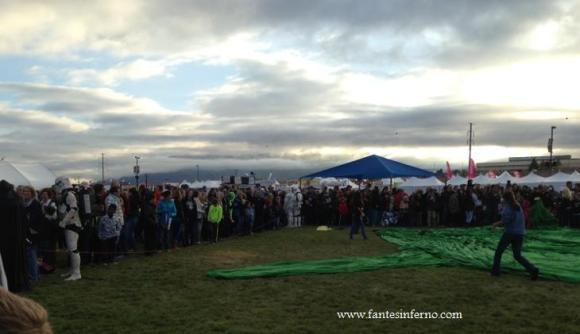 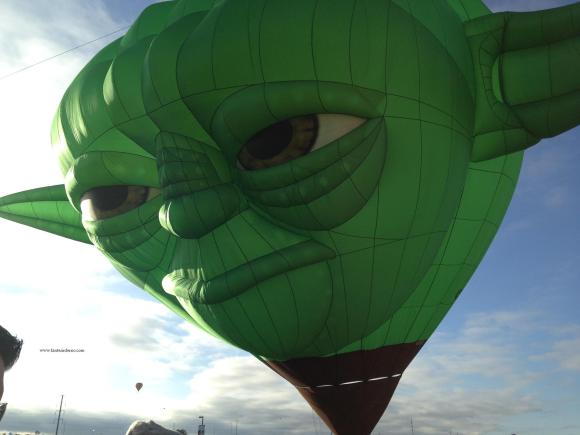 But no sooner than I had gotten home from JFK Sunday morning, I was pulling together every book I wanted autographed, my sketch book for commissions, and of course The Captain America Project to (hopefully) complete.  I arrived at the Javits Center around 9:15 that morning, and I was surprised to not see a crowd gathered in front.  But reality soon set in when I realized the thousands of attendees were lined up in the lower level of the convention center prior to the 10:00 start time.  Overall it was a good system, and even though I was towards the back of the line I made it into Artist Alley by about 10:15.  Thankfully most of the attendees were heading to the exhibit hall and Artist Alley was practically empty when I walked in.

My top priority at NYCC was completing the Captain America Project: a jam page of 20 drawings of Captain America by 20 different artists.  After four years, 17 of the 20 spots on my Captain America jam page had been filled by artists like Jim Lee, David Finch, Herb Trimpe and even Golden Age artist Allen Bellman.  I had put a lot of thought into which artists I wanted to finish the page, and even though there were more artists to choose from than spots available on the page, I decided they would be filled by three of my favorite artists of the last 30 years.  My first two stops were Lee Weeks’ and Bob McLeod’s tables.

Weeks’ art has been a favorite of mine over the last ten years, most recently his work on Daredevil: Dark Nights #1-3, and I’ve been a huge fan of Bob McLeod’s work since the early 80’s, particularly his run on The New Mutants.  So as long time fans of their work, they were “must haves” on The Captain America Project.  I had originally planned on posting scans of their Cap sketches in this post, but then I realized they would be major spoilers of their individual posts for The Captain America Project, so I decided to hold off.  But in the meantime, here are a couple of pictures of them sketching on the page: 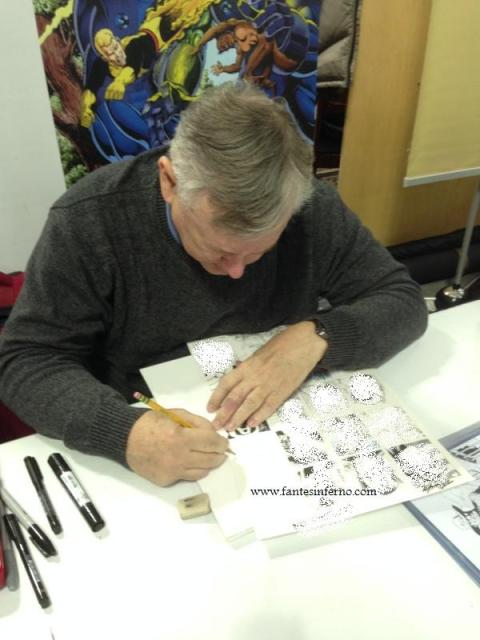 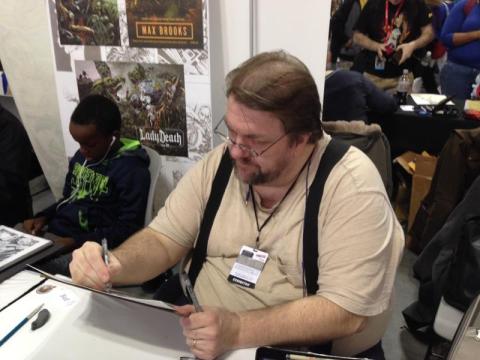 Unfortunately, the third artist that I was hoping would cap off the page (pun intended) wasn’t able to attend Sunday, so I’ll keep that one a surprise until I’m able to get that sketch at a future show.

After collecting autographs from artists Rob Liefeld, Allen Bellman, Howard Chaykin and former Marvel writer/artist/editor Al Milgrom for my copy of Marvel: Five Fabulous Decades of the World’s Greatest Comics, my last stop of the afternoon was The Artists’ Choice table for a sketch from artist Jerry Ordway (Superman).  Going into the show, one of the items on my wish list was a full sized sketch of Superman from Ordway, and he didn’t disappoint with this gem:

I had every intention of staying until the end of the show to hit the exhibit hall and get a few more sketches, but by 3:00 I realized that I hadn’t slept in over 30 hours (maybe that’s a con endurance record?) and it was time to head home before I passed out and the attendees swiped my sketches.  But this year’s NYCC was definitely worth the red eye flight and sleep deprivation.  Looking forward to next year!