Matches for: “the captain america project” …

The Captain America Project is winding down, and the 19th spot on this jam page was filled during the 2014 New York Comic Con by one of my favorite artists, Bob McLeod.

I’ve been a fan of his work since Marvel Graphic Novel #4 (The New Mutants) and in addition to his pencils and inks on Marvel and DC titles like The Amazing Spider-Man and Action Comics, his art in The Uncanny X-Men #152 (and that issue’s fantastic cover) still stands out as a favorite of mine in the middle of Dave Cockrum’s second run on the title back in 1981.

So there’s one spot left on the page, and I have one particular artist in mind for the 20th spot.  It’s been over four years since I started The Captain America Project, and I’m looking forward to finally completing it this year.  I’m going to attend three New York based comic conventions in the next several months, so hopefully I’ll have the final spot filled by then and I can finally have this amazing page framed and on my wall.

One of my goals at the 2014 New York Comic Con was to wrap up the Captain America project.  With three spots left on the page, I had made my list of final “must have” artists to complete it.  My first stop at NYCC that Sunday morning was Lee Weeks’ table.

I’ve been a fan of Lee’s work for years and really enjoyed his three issue run on Daredevil: Dark Nights (#1-3).  He did a great job on this Cap sketch, and it’s a fantastic addition to the page.

When I started the Captain America Project in 2010, I knew the page would not be complete without a sketch by Michael Zeck.  His run on Captain America in the early 80’s was my favorite of the title and stood out with his bold artwork and amazing covers.  He rarely made convention appearances so I wasn’t sure the opportunity would come up for a sketch, but I always kept a space open on the page “just in case. ”  Back in June I had the honor of meeting him at Wizard World in New York and he drew this fantastic Cap sketch for me at the show.

A big thanks to Michael and also to Renee Witterstaetter of Eva Ink Artist Group for the opportunity to add this Captain America sketch to the page.

I’ve met Joe Sinnott on several occasions at the New York comic book conventions over the last several years.  Each meeting has always been a pleasure and honor to chat with one of the legends of Marvel Comics.  The highlights of his career are too numerous to list, as he’s inked every major artist for Marvel/Timely over the last 60 years.  Needless to say, a Captain America sketch from Joe was a must have!

When I started the Captain America Project in 2010, I never expected to meet or obtain a sketch from a Golden Age comic book artist that actually drew Captain America during World War II.  But last March when I read that Allen Bellman would be attending Mike Carbo’s New York Comic Book Expo, I had to meet him.  Before I could even ask if he was sketching, he saw my Captain America jam page and quickly grabbed a pencil to draw a classic style Cap for me. 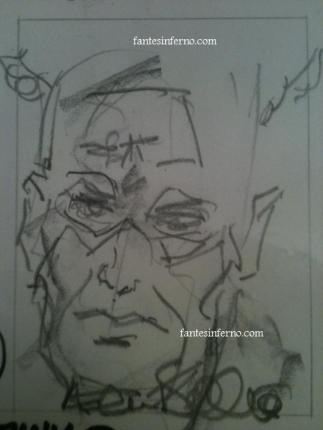 I wrapped up an incredible haul from 2010’s Big Apple Con and New York Comic Con with this amazing Captain America sketch from the great Jim Lee.  I uploaded a larger than usual image to show the texture and shading from the exposed pencil lines bringing out a darker mood in Cap’s expression.  This is an amazing sketch.

Hi folks!  I just got back from an amazing vacation in Italy, hence the lack of posts the last few weeks.  I have a few Italy related posts in the pipeline, but I figured the best way to get back in the swing of things on Fante’s Inferno was with a post on the Captain America Project.

The twelfth spot on my Captain America jam page belongs to the amazing Adam Hughes.  I’ve seen him at the New York comic conventions over the years and I never get tired of watching him draw.  He was drawing quick sketches at the 2010 New York Comic Con in return for donations to a charity he was raising funds for and I was fortunate to get a Captain America head sketch.

I really like that the pencil lines are still visible underneath the inks.  It’s amazing how much strength Hughes was able to capture in Cap’s expression with only a few lines.

The 2010 Big Apple Con was also a mother-lode of Captain America sketches for my jam page.  Next up on my list was Khoi Pham.  I love the line work on this panel.  And even though only half of Cap’s face is visible, Pham brings out the intensity in Cap’s expression.

We’re officially at the halfway point of the Captain America Project!  To call this a passion project is an understatement.  It’s been almost two years since I commissioned the first Captain America sketch for this jam page, and I’ve enjoyed it every step of the way.  I’ve had more than a few folks I’ve met at the comic cons say “Are you still lugging that thing around?”  Yep, until it’s finished!  I won’t give away how many panels I have to go, but it’s almost complete.  In the meantime, I hope you’ll enjoy the updates!

Steve Epting was the second artist I approached at the 2010 New York Comic Con at the Javitz Center.  As a fan of his run on Captain America, he was one of the artists I needed to get a sketch from for this page.   His commission list was full by the time I made it to his table but since the panel was smaller than a baseball card, he said he would try to fit it in later in the show.  Needless to say, it was worth the wait!