A Day at Special Edition: NYC 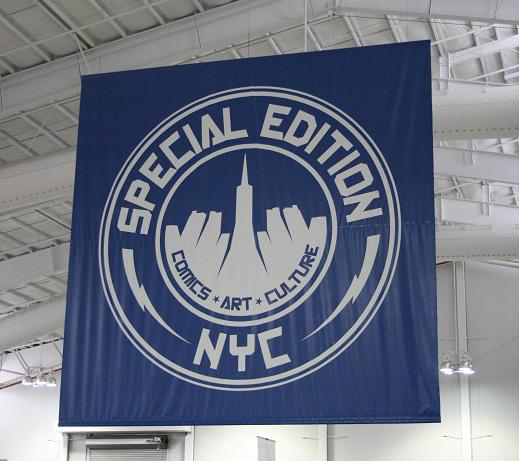 On Saturday June 14th I had the opportunity to attend Reed Expo’s Special Edition: NYC at the Jacob Javitz Center.  Since its announcement earlier this year, I was looking forward to this event due to its smaller size than October’s New York Comic Con, and its greater focus on the comic book creators.

I arrived at the Javitz Center about a half hour after the doors opened Saturday morning, and at first I wondered if I was in the wrong venue.  There was no line to get into the convention center and it was almost completely empty.  The exhibit hall/Artist Alley was located in the North section of the convention center (Artist Alley at the last two NYCC’s) and while it was a smaller show in terms of space and overall attendance, there was still a good buzz and a good sized crowd for the room.  It was much more low key than NYCC and it gave attendees a better opportunity to meet and chat with the writers and artists in attendance.

First stop in Artist Alley was Jerry Ordway’s booth.  A sketch from Jerry was always high on my “must have” list, and I was fortunate enough to have Jerry add Superman to my sketch book.

My priority at any comic convention is adding new sketches to my sketchbook, and one of the realities of this obsession is standing in line, sometimes for hours, just for the opportunity to meet or get an autograph/sketch from a favorite creator.  But  it’s always great to meet fellow comic fans on line and talk comics and comic art.  While on line for my Ordway sketch, a fellow attendee showed his latest ink:

Batfan Joe shows off his tattoo in progress of the Joker (front) and Batman (back).

Another highlight of the show for me was meeting writer/artist/editor and Alien Legion co-creator Carl Potts.  Alien Legion was a favorite comic of mine in the 80’s, and one of my favorite pieces of original comic art in my collection is a page from Alien Legion #4 written by Potts, and drawn by Frank Cirocco and Terry Austin).  I purchased a copy of his latest book The DC Comics Guide to Creating Comics and was happy to hear that Titan Comics will relaunch Alien Legion with Alien Legion: Uncivil War #1 on June 25th.  Needless to say, I’m looking forward to the return of Jugger Grimrod, Torie Montroc and Sarigar!

Some other pickups at the show included two hardcover copies of Marvel Masterworks, X-Men #122 and #123 by Claremont, Byrne and Austin, New Gods #4 by Kirby and Micronauts #2 by Mantlo and Golden.  The final highlight of the show for me was the opportunity to stop by the table of freelance artist and good friend Jose Molestina of Journey Studios.  In all Special Edition: NYC was a great time and I hope Reed Expo brings it back next year.

Jose Molestina of Journey Studios and his sketch of the Flash, the newest addition to my comic art collection.

One thought on “A Day at Special Edition: NYC”