Farewell to the Mamaroneck Playhouse

On Thursday April 17th my hometown movie theater, the Mamaroneck Playhouse, closed its doors and will eventually be torn down for condos.  Built in 1925 as a vaudeville theater, it’s been the center of Mamaroneck’s business district for 89 years.  The news was a surprise to everyone back home, with property owner Bow Tie Cinemas breaking the news to local officials only the night before.  According to the company, the playhouse wasn’t economically sustainable, but Mamaroneck residents (and former residents such as myself) are skeptical of that claim considering it’s a first run theater in a vibrant business district, surrounded by a variety of restaurants and parking.

The films I’ve seen there over my lifetime range from blockbusters (E.T.: The Extra-Terrestrial), to the obscure (Raise the Titanic), to some titles better forgotten (lest I be judged…).  Even though the last film I saw there was back in 2001 (The Curse of the Jade Scorpion), most of the films I’ve written about on Fante’s Inferno were originally screened at the Mamaroneck Playhouse.

I’ve seen the theater evolve from a single screen with balcony seating to a four screen multiplex almost 35 years ago.  Most of the films I’ve seen there were in the 80’s, but my favorite era of the Mamaroneck Playhouse was the mid-to-late 70’s when it was still only one screen.  Not necessarily because the movies were better, but because of the old school memories of the ushers walking up and down the aisles, shining their flashlights into the faces of anyone who dared to talk during the movie or put their feet up on the seats.  At one point in my early years attending that theater, they actually sold comic books on a spinner rack in the lobby.  By 1980 it was chopped up into four separate theaters, a crime in and of itself for altering the classic interior.

In honor of the now closed Mamaroneck Playhouse, here are a few of my favorite films screened there over the last 42 years:

Released in theaters in 1975, but screened as part of a double feature with Jaws 2 at the Mamaroneck Playhouse in the Summer of 1978.

When I think back to the night I saw this film back in 1980, I’m reminded of how even the greatest comedy is funnier with the laughter of others around you.

This was a fun movie to see in the theater back in 1980.  A lot of folks in the theater didn’t quite “get” it, but those of us in the sci-fi/D&D crowd appreciated it on every level, from the production design and special effects to Queen’s still amazing score.

My introduction to the films and genius of Terry Gilliam.  Still one of my all time favorite films.

A fun movie, and a great movie memory.  Four friends sitting in the front row of a matinee in an empty theater during the start of summer vacation.  A coke in one hand, a bag of Twizzlers in the other.  When I think of summer moviegoing, that’s the first memory that comes to mind.

By the time my brother and I were finally able to see the X-Men on the big screen, we had waited about 20 years from when an X-Men film was first announced.  It was worth the wait. 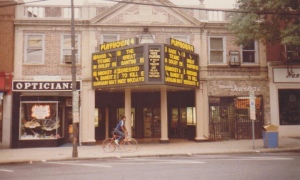 The picture above is how I will always remember the Mamaroneck Playhouse.  My main concerns over the theater closing its doors are less nostalgic than they are cultural.  The business district lost its book shop several years back, and now its movie theater is gone.  Sure, higher ticket prices, home video/theater systems and the lower standards of movie theater etiquette have kept people home in recent years, but one element of moviegoing enjoyment has been the sense of community.  I remember one Saturday night back in the early 80’s when it seemed like half of the audience was made up of our friends and neighbors.  Despite the access to many amazing and obscure films since I’ve moved to New York City, that’s one feeling I haven’t been able to experience as a moviegoer here.

I haven’t seen a movie at the Mamaroneck Playhouse in over a decade, so I can’t attest to the recent condition of the theater (though recent reports on the closing reference less than ideal conditions in the theater).  With 20+ years of cinematic memories there I feel a sense of personal loss, but I also feel the loss for the current and future residents of Mamaroneck who won’t be able to experience seeing a movie there followed by a slice of pizza at Sal’s Pizzeria across the street.  At least Sal’s is still there.

One thought on “Farewell to the Mamaroneck Playhouse”