Fante’s Inferno revisits the films of the Summer of 1982, considered the greatest movie summer for fantasy and sci-fi fans. 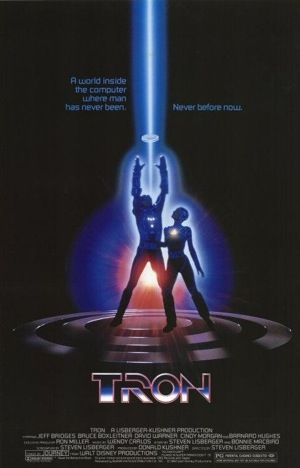 Written and Directed by Steven Lisberger

During the summer of 1982 I  spent more than a few days at the local movie theater and comic shop, but my favorite hangout in my hometown was the local video arcade.  Prior to the video game boom, the game room at Cook’s restaurant was filled with the sounds of pinball machines, skee ball and air hockey, but by 1982 it was in full swing with video games ranging from the classic Pac Man, Space Invaders and Missile Command to Battle Zone, Punch Out and my game of choice: Galaga.  They were great games and still are.  I don’t even want to attempt to estimate how many quarters I plunked into those machines from 1979 to 1986.  On a recent trip to Cape Cod I was in a restaurant that had Galaga and I couldn’t resist playing a game or two, although nowadays when I see a pinball machine or video game with 50 cents or $1 per play my first reaction is “That is an outrage!”

Back in the Summer of ’82 I remember most of my friends going on and on about how cool Tron was.  The special effects made it look like the type of video game we were hoping to see in our arcade sooner rather than later.  You would think that a film like Tron would have had me camping out for the first screening, but looking back I don’t think I saw it in the theater.  I don’t think I saw it more than once on cable TV either.  How the heck did that happen?

I was starting to think I had missed out on a rite of passage and had to make up for lost time.  My 42″ TV is pretty big for my apartment, but watching the first scenes that took place within the mainframe made me wish I had experienced watching Tron on the big screen at my local cinema back in 1982.  The production design is simple even by 1982’s standards, but it reminds me of the vector graphics of several video games I played back in the day, particularly Battle Zone  and the Star Wars arcade game.  Tron’s beauty is in this simplicity, and it’s accented perfectly by the colors and lighting effects of the costumes designed by none other than the great Jean Giraud (aka Moebius).

Jeff Bridges (The Big Lebowski, The Fabulous Baker Boys, Iron Man) is always a pleasure to watch on film and David Warner (Time After Time, Time Bandits, Masada) is perfectly cast in Tron as his nemesis Sark.  Warner’s performance, along with his performances as Jack the Ripper in Time After Time, Evil in Time Bandits, and Chancellor Gorkon in Star Trek VI: The Undiscovered Countrymake him in my opinion the consummate movie villain.

I love the concept of Jeff Bridges’ character Kevin Flynn experiencing the world within the mainframe system, but when I watched Tron again this week my one caveat was that even my ten year old self would have felt the circumstances leading to Flynn’s transportation into the inner world of the mainframe might have been a bit too simplistic.  And like a few other films from the Summer of ’82 the pace was a little too slow for me.

Steven Lisberger created an amazing hybrid of fantasy and tech that was said to have been influenced by his first exposure to Pong in the mid-70’s.  It’s funny how Pong, the simplest video game that is now used as a punch line when discussing technological advances, led to one of the boldest cinematic visions of the 80’s.  The video games of the 80’s may not have had the graphics of Tron, but Tron gave video games something to aspire to.  While it was a modest critical and box office success (it only grossed $33 million against its $17 million dollar budget), Lisberger should be praised for pushing the envelope to achieve a look that moviegoers still vividly remember 30 years later.

With the anniversary upon us, I’ve been seeing quite a few articles proclaiming the summer of ’82 as one of the best summers for movies ever.  This Yahoo slideshow sums it up pretty well.  My first thought regarding the summer of 1982 is usually, “Holy crap, has it been 30 years?”  The second is: “Holy crap, that was a great summer for movies!”

I turned 10 that summer, and in addition to going to the local movie theater, most of that summer was spent reading Marvel comics, playing video games (on the Atari 2600 and at our local arcade) and playing Dungeons & Dragons a couple of times a week.  In short, it was heaven.

I’ll admit, scanning through these 15 films, there are a few that don’t really resonate with me in 2012 (The World According to Garp, An Officer and a Gentleman, and Night Shift), but most of the rest are still favorites of mine and it boggles my mind that they were released over the course of a few months.  Several fall into the category of “when I flip through the channels and it’s on, I watch it to the end.”

One film that surprisingly isn’t on this list is Clint Eastwood’s Firefox (6/18/82).

I’d like to revisit each of these films in blog posts corresponding to the week they were released, but as you can see I’m a bit behind schedule with the first six, but the 30th anniversary of the release of Blade Runner (one of my favorite movies of all time) is coming up, so I’d better get cracking on that one.

On a side note, thank you to everyone that has been reading and following my blog.  The latest stats show visitors from 26 countries.  Please feel free to comment, as well as follow me on Twitter (@Fabrizio_Fante).  Emails are also welcome at fabfante (at) gmail (dot) com.