Fante’s Inferno celebrates summer movie-going by revisiting the films of the Summer of 1983. 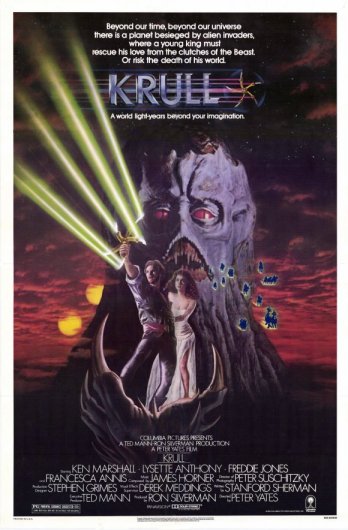 This is a review that I’ve been looking forward to since I began this retrospective on the films of the Summer of ’83, but not for the reasons you would expect.  Most of my reviews involve revisiting films I enjoyed or may have missed in the theaters upon their initial release 30+ years ago to see if they still hold up, but back when Krull first hit theaters on July 26, 1983 I distinctly remember not enjoying  it.

By the Summer of 1983, I had been raised on a steady diet of fantasy films like Excalibur and Dragonslayer (both of which still hold up in my book) and Krull didn’t measure up to those films when I first saw it at age 11.  But since then, other nostalgic fantasy/sci-fi fans I encounter always talk about how much they loved Krull as kids.  Was there something I missed?  So I went into this week’s screening with an open mind to see if it indeed was a good film on par with its cinematic peers of the early 80’s.

The film begins with a mountain-like vessel traveling through space and landing on the planet Krull.  “The Beast” leads his army of Slayers in conquering the planet.  Prince Colwyn (Ken Marshall) and Princess Lyssa (Lysette Anthony) are about to be married, merging their fathers kingdoms in order to fight The Beast’s army, but the ceremony is broken up by the Slayers, their armies killed and Lyssa is kidnapped.  Left for dead, Colwyn is healed by Ynyr (Freddie Jones) and retrieves a weapon known as the Glaive before he can attempt to rescue Lyssa.  Colwyn recruits a group of escaped convicts on his journey to find the Black Fortress and Princess Lyssa.

The opening credits of the film had me impressed with the level of talent that collaborated on Krull, particularly director Peter Yates and composer James Horner, but the excitement I felt during the opening credits slowly turned into disappointment once the opening line of the film was delivered, and continued as the film progressed.  The main source of disappointment for me was with Krull’s script, which is a pastiche of elements from successful fantasy/scifi films that came before it.  Prior to Krull, screenwriter Stanford Sherman wrote for the 60’s classic television series Batman and The Man From U.N.C.L.E. and later one of my favorite movies as a kid, Any Which Way You Can starring Clint Eastwood.  Unfortunately Krull’s weak story has a ripple effect on the rest of the talent involved with the production beginning with director Peter Yates.

Yates’s drama The Dresser (also released in 1983) is a film I enjoyed particularly for actor Tom Courtenay’s performance in the title role.  Going into Krull, I had expected Yates to bring out impressive performances in the cast as he had with Albert Finney and Courtenay in The Dresser, but Sherman gives the characters little in terms of depth, and his uninspiring dialogue gives the actors little to work with.  Yates’s use of the camera for the location shots is surprisingly static, and the imposing  mountains of Cortina in Italy fall flat with shot compositions containing little action.

I was very happy to see James Horner’s name as the composer of the film.  His distinguished career includes the incredible score for Star Trek II: The Wrath of Khan, and his score for 1991’s The Rocketeer is one that I break out on occasion when I need a burst of inspiration.  Beginning with the opening credits, his score for Krull is powerful and heroic but unfortunately it keeps that same tone throughout most of the film and there are moments the audience needs a breather.

And so, 30 years later I now realize why I didn’t enjoy Krull back in 1983: in my opinion every line of dialogue, every effect, fight scene, etc. overachieved and subsequently fell flat in the attempt to create an epic fantasy film.  The individual parts just didn’t gel, and instead of an epic story Krull plays out as more of an introductory level Dungeons & Dragons module.

The Films of the Summer of ’83

I had such a great time revisiting the films of the Summer of ’82 last year that I actually experienced withdrawal when I completed the retrospective.  Each week I looked forward to screening an old classic from an amazing summer, allowing me to not only revisit each film with a fresh perspective, but also to relive the excitement of many a weekend spent in the local movie theater with a large coke and a pack of Twizzlers.

I wanted to write another summer movie retrospective but wasn’t sure I would be able to find another lineup of films that could compare to what is considered the greatest movie summer for fantasy and sci-fi fans (I can’t think of another summer that had anything close to the number of fantasy and sci-fi films we were blessed with that year).  I then decided not to approach a new retrospective in comparison to last year’s on the Summer of ’82, but rather as a nostalgic celebration of summer movie going as a whole.

A glance at the films of the summer of ’83 shows a mix of classics and cult favorites in equal parts sci-fi, thriller and comedy.  Unfortunately there were several clunkers in the mix that summer, but overall it’s a lineup of films that I enjoyed in 1983 and continue to enjoy today:

My reviews will focus mainly on the scifi, fantasy and thriller genres.  First up will be the classic 80’s Cold War thriller WarGames!