The Summer of ’83: WarGames

Fante’s Inferno celebrates summer movie-going by revisiting the films of the Summer of ’83. 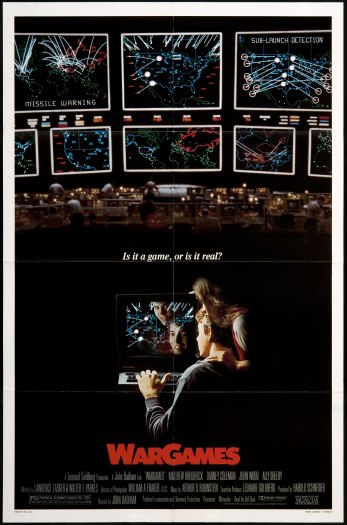 Shall we play a game?

30 years later, these words spoken by Joshua still have a chilling resonance.

I’ve seen John Badham’s Wargames at least 20 times since my first screening at the Larchmont Theater in June 1983.  It’s one of my favorite films of that particular summer and a perennial favorite since.  Watching it again this week reminded me not only of what a great film WarGames is, but also of how it coincided with my Golden Age of computing in the 80’s.  Back in 1983 the green text on the black monitor of my school’s TSR-80 was as high tech as it got for me (until I moved up to the Commodore 64 and its Royal Blue start screen), but I really enjoyed the days of playing the Infocom classics (Zork, The Hitchhiker’s Guide to the Galaxy, Planetfall, Ballyhoo), Montezuma’s Revenge and Trolls and Tribulations.  WarGames is a time capsule of early 80’s computing, but the film still keeps me on the edge of my seat down to the final minutes.  Even with a young Matthew Broderick as the protagonist WarGames doesn’t feel like a teen adventure and holds its own as a well made Cold War thriller.

WarGames begins in the bunker of a nuclear launch site as two launch technicians (played by  actors Michael Madsen and John Spencer) arrive for their shift.  Their arrival at the launch facility is no different from any two average Joes arriving at the office for a day’s work.  But once the alarm sounds, they methodically go through the launch procedures, checking and confirming codes until they learn they must deploy the nuclear warhead.  Spencer’s character hesitates, and the scene ends with Madsen’s character holding up his revolver to get his partner to comply with their orders.  It’s soon revealed that the launch sequence was a test by higher ups to gauge the success rate of the crews following through on their orders to deploy their missiles.  Chief engineer John McKittrick (played by Dabney Coleman) uses this as an opportunity to install a supercomputer (the WOPR – War Operation Plan Response) to take the place of launch technicians and provide a failsafe against the possibility of human hesitation.

I recently took a trip to South Dakota with my faithful sidekick, and coincidentally one of our stops was the Minute Man Nuclear Missile Site near the Badlands national park.  Unfortunately the tour of the launch site was booked for the day, but we got to see a picture of it in the visitor center.  It looked exactly like the launch facility in the opening scene of WarGames so I asked the Park Ranger on duty that day if any films were shot there after it was “retired.”  She advised that the site has never been used as a movie location, but launch facility set created for WarGames was accurate and identical to Minute Man.  With the exception of Michael Madsen pulling out a gun on John Spencer, even the launch sequence in the film was accurate.

Enter David Lightman (played by Matthew Broderick), a high school student and computer whiz who would rather use his talents as a hacker than apply himself in school.  He purposely gets his teachers to send him to the principal’s office so he can look up the passwords to their network and hack into their system.  During dinner with his parents, he learns that computer game company Protovision will be releasing a new line of games.  David can’t wait for them to be released, so he attempts to hack into their network and get early access to the games.

After days of research and long nights trying to crack Protovision’s network through a back door in the system, a benign remark by his friend Jennifer (played by Ally Sheedy) provides David with the logon and password he needs to break in.  But instead of hacking into Protovision, David has unwittingly hacked into the WOPR (also known as Joshua).  He is greeted by Joshua, who thinks that David is his creator Dr. Stephen Falken, and suggests a game of chess.  David insists on playing Global Thermonuclear War, however the “game” is actually the program used by the WOPR to simulate nuclear attacks.

David and Jennifer’s game sets off alarms at NORAD, and the staff headed by McKittrick and General Berringer (played by Barry Corbin) believes they are under nuclear attack by the Soviet Union.  The “threat” disappears when David shuts off his computer, and NORAD quickly learns that it was only a simulation.  They track the break in from David’s hometown of Seattle.  David quickly realizes the gravity of the situation when the simulated attack makes the evening news.  He disposes of the evidence but is still being contacted by Joshua.  The FBI takes David in for questioning at NORAD, but despite his insistence that he thought he was simply playing a game, McKittrick doesn’t believe his story and has him detained on suspicion of espionage.  He uses his tech savvy to sneak out of NORAD (which requires a little suspension of disbelief) and sets out to find Dr. Falken (played by the great John Wood) and prevent Joshua from starting a nuclear war.

What still makes the story accessible despite the dated equipment is Badham and Broderick’s representation of the fun and blank slate of the early days of home computing without dumbing it down with unrealistic graphics.  One of the caveats I’ve always had with computer/tech themed films is how the functionality of computers, networks, etc. are “jazzed up” to make computers more cinematic.  There’s a little bit of that with regard to David’s conversations with Joshua, but the simple typed lines of text typed onto an old school monitor ensure that WarGames doesn’t overachieve with regard to the functionality of early computers.

I already had a DVD copy of WarGames when the 25th Anniversary DVD was released in 2008.  Normally I would have been happy with my first copy, but this new edition had a Making Of featurette that made the purchase a no-brainer.  Despite my appreciation for WarGames and its rank among my all time favorites, I hadn’t actually researched the making of the film.

I didn’t know that John Badham had replaced Martin Brest (director of Scent of a Woman and Meet Joe Black) early in the film’s production.  Badham had received acclaim for the era defining 70’s classic Saturday Night Fever and had another hit film, Blue Thunder starring Roy Scheider released one month prior to WarGames.  Brest had Broderick and Sheedy initially playing their roles with a darker tone, but fortunately Badham lightened it up.  The beginning of the film needed the infusion of teenage innocence and cluelessness in order for the story to unfold more effectively.  The playfulness in Broderick and Sheedy’s early scenes really add to Broderick’s performance when McKittrick’s mistrust and threats hit David in the gut.

But one piece of information about the production that truly blew me away was how the producers had originally considered John Lennon to play the role of Dr. Stephen Falken.   While I think WarGames was near perfect as is, it would have been amazing to see how Lennon would have played the role.  Screenwriters Lawrence Lasker and Walter F. Parkes’ tight story combined with Badham’s direction and a fantastic, believable cast takes the audience on a great ride down to the final moments of the film.

WarGames made me and my brother beg our father to buy our first computer.  I still remember the day he drove us to Caldors department store and completely trusted us to make that purchase without balking at the price.  The Commodore 64 required a keyboard and disk drive purchased separately, and your TV would be the monitor.  The salesman asked if we also wanted the modem to go along with it.  I instantly thought of David Lightman using his modem to hack into Protovision.  Fortunately we didn’t add the modem to our purchase and we stayed at Defcon 5.