From My Collection: Finding A Bargain Box Copy of Fantastic Four #51

Fifty years ago today Fantastic Four #51, Stan Lee and Jack Kirby’s classic “This Man…This Monster” hit the spinner rack and quickly became one of the most memorable and beloved stories of their incredible run.

I’ve seen many references to “This Man…This Monster” over the years, each with a scan of Kirby and Sinnott’s splash page of the Thing walking the streets of Manhattan in the rain. But regardless of how many times I’ve seen a blurb or article praising FF #51’s story, art, and its place in comic book history, I never actually read the story.

I’ve recently started collecting Marvel Masterworks, including the first volume of the Fantastic Four covering issues #1-10. As much as I enjoy reading the classic Silver Age stories in that format, I find the new coloring a bit “off” and I still very much prefer reading original comic books in their four color glory, which is part of the reason I hadn’t read “This Man…This Monster” until recently. But I’m getting ahead of myself.

Back in June of 2015 I had attended Special Edition NYC, Reed Expo’s offshoot of the New York Comic Con, which was a smaller convention that is more focused comic books and the creators than NYCC. In spite of the mile long line to get into Pier 94, the crowd was very manageable for that venue. Normally at comic conventions I tend to stay in Artist Alley and spend most of my money on sketches, but his time around I was looking to buy some Bronze Age Marvel and DC Comics. One vendor in particular caught my eye with several tables of long boxes with comics priced from $2 to $7. I was expecting to find books from the 70s and 80s (and there were plenty of those) but as I worked through the boxes, I started to find more than a few Marvel books from the 60s!

And there it was: Fantastic Four #51.

It had to be a reprint, I thought. But a quick glance of the cover made it clear that I was holding a well read original copy of “This Man…This Monster.” How it was still in the box was a mystery to me considering the crowd gathered at this booth and the low price. Granted it was in very bad shape (it would probably have been graded as a 0.5), the cover was still barely attached by one staple and there was an old Marvel Comics sticker affixed to the back. Coincidentally the sticker was the Kirby/Sinnott drawing of The Thing from the cover of this particular issue. In spite of the condition, I had to have it even if it was falling apart and destined to be a reading copy.

The story begins with a dejected Ben Grimm (The Thing) standing in the rain in the streets of Manhattan, feeling sorry for himself and his present physical appearance. A mysterious stranger invites him into his home, offering Ben a cup of coffee and a sympathetic ear. But all isn’t as it seems. The mysterious host is a frustrated scientist jealous of Reed Richards and has drawn Ben into his home to drug him and test his “duplication apparatus.” He hooks the machine up to Ben and himself, taking on the physical appearance of The Thing while Ben reverts back to his human form. 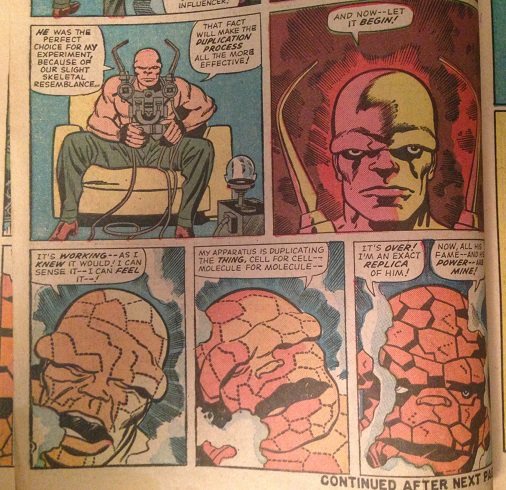 Several days later in the Baxter Building as Reed Richards (Mr. Fantastic) works on a weapon that would take on Galactus, the impostor Thing enters and begins to help Reed with the heavy lifting. But no sooner than he arrives, the real Ben Grimm storms in warning Reed and Sue (the Invisible Girl) that the orange monster in front of them is a fake. Despite the real Ben’s pleas to believe him, Reed and Sue can’t believe that Ben would have reverted back to his human form. Ben storms out leaving the impostor in his place, which could be fatal to Reed.

No spoilers here. This is a great story with all of the elements of classic 60’s Lee and Kirby and emotional impact on every page. And it wouldn’t be a Kirby FF without a splash page or three that truly showcases his genius. Reading this original copy of Fantastic Four #51 inspired me to find and collect other original issues from Lee and Kirby’s run. I bought my first Lee/Kirby FF a couple of years back during an impromptu visit to the Astro-Zombies comic shop in Albuquerque, NM thinking that would be the the only pre-FF #100 issue I would own. And while I won’t be able to afford a copy of Fantastic Four #1 any time soon, I’ve begun a collection of pre-FF #100 issues (ranging from issues #33 to #93) that numbers twelve and counting for less than $10 each. They may be reading copies, but they’re mine and I still treasure them.