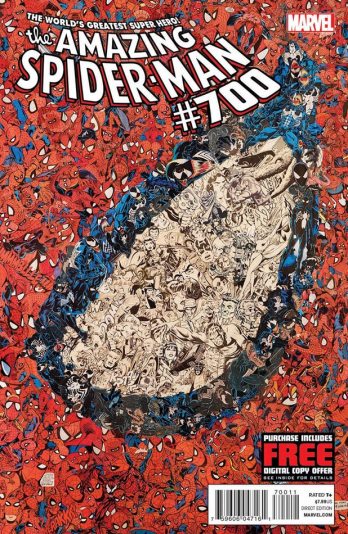 Well, for now at least.

The Amazing Spider-Man #700 hit comic shops on Wednesday December 26th.  Normally I look forward to a milestone issue with a sense of celebration as a comic book withstands the test of time and reaches another multiple of 100.  But the internet was buzzing in the weeks prior with rumors of Peter Parker’s death in this final issue of Marvel Comics’ flagship title, and I approached Wednesday December 26th with a sense of dread.

I bought a copy of The Amazing Spider-Man #700 from my local comic shop that morning (autographed by writer Dan Slott), but I needed to prepare myself  before reading this final issue because regardless of the quality of the story, by the last page Peter Parker would be dead (for now at least) and there would not be an Amazing Spider-Man #701 next month.

One of the first comic books I ever owned was The Amazing Spider-Man #175 (read the About section of this website).  Of all of the characters in the Marvel Universe, I could empathize with Peter Parker the most.  That sense of empathy only increased back in 2010 when I had the opportunity to see Steve Ditko’s original pencil and inked splash page to the first Spider-Man story in Amazing Fantasy #15 at the Library of Congress.  This page was our introduction to Peter Parker, the young man who would become Spider-Man and carry the responsibilities and burdens of his powers for the next 50 years of his comic book life.

Part of my emotional investment was from nostalgia, but most of it was respect for the character and the creators that worked on the Spider-Man titles over the last 50 years.  Leading up to Wednesday December 26th, I was fully prepared for the outcome of Dan Slott’s story.  I didn’t agree with it, but I had to accept it as reality.   If The Amazing Spider-Man was going to end its run, I could only hope the final issue would be worthy of its history.

Leading up to issue #700, Doctor Octopus pulled a mind/body switch with Peter Parker and is now fully entrenched in Parker’s body while Parker is trapped in Octavius’ dying body, each man with access to the other’s memories. Parker/Octopus, with hours to live, breaks out of prison with the memory of an Octavius escape plan and the help of Scorpion, Hydro-Man and The Trapster.  A showdown ensues and Octavius/Spider-Man is victorious.  But as Parker/Dr. Octopus lays dying, he forces his memories onto Octavius/Spider-Man though a link their minds still share.  Parker’s key memories as Spider-Man (the death of Uncle Ben, the death of Gwen Stacy, etc.) are too much for Octavius/Spider-Man to handle and he is overcome with emotion and the realization that “with great power, comes great responsibility.”  Octavius finally understands, and with his dying breath Parker declares him Spider-Man and makes him promise to keep his loved ones safe.  At that moment of Peter Parker’s death, Octavius/Spider-Man promises to use his “unparalleled genius” and “boundless ambition” to be an even greater version of Spider-Man.  From that moment on, he will be THE SUPERIOR SPIDER-MAN!!!

Which reminds me, The Superior Spider-Man #1 comes out Wednesday January 9th.

The Freaky Friday-esque plot was disappointing enough, but the ending was the true disappointment for me.  I find it hard to believe that Dr. Otto Octavius, one of Spider-Man’s greatest nemeses, could suddenly feel sympathy for Peter Parker to the point where he becomes overcome with emotion and converts from evil to good.  Even with full access to Peter’s memories, he is still first and foremost Dr. Otto Octavius.  After an intense fight sequence, this resolution is a letdown.

I hope the death of Peter Parker is just a sales gimmick that will be reversed down the line.  But regardless of whether or not this happens, the damage has been done: The Amazing Spider-Man has ended.