David Finch has been one of my favorite artists since his run on New Avengers.  The first page of original art I bought was from New Avengers #13.  In subsequent years I picked up a couple of pages from his Moon Knight run, and a few sketches at the New York conventions.

One week after the 2010 Wizard World New York show, he was appearing at the New York Comic Con at the Jacob Javitz center.  He was the first artist I commissioned for the Captain America Project at that show.  I had commissioned a few sketches from David in the previous three New York Comic Cons, and I have always been in awe of his artistic ability.  Check out his series of DVDs for the Gnomon Workshop and you’ll see what I mean.  But he took it to a whole new level with this Captain America head sketch.  Take a close look at the picture below.  It was drawn with a ball point pen.  No pencil sketch underneath.  He just flat out drew it straight from his mind’s eye.  In ballpoint pen.  Amazing. 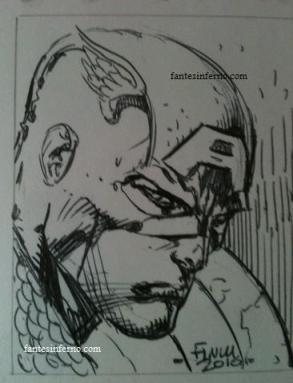