The Summer of ’82: The Road Warrior

Fante’s Inferno revisits the Summer of 1982, considered to be the greatest movie summer for fantasy and sci-fi fans. 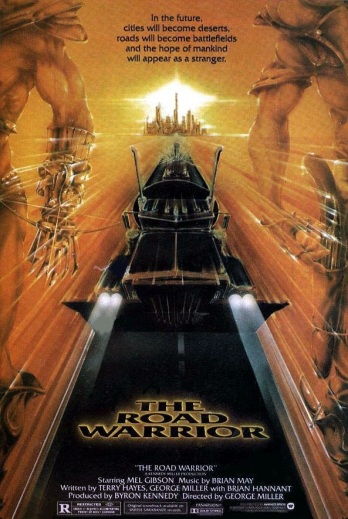 The Road Warrior was originally released in Australia in 1981, but made its U.S. debut in May of 1982.  Director George Miller (Mad Max, Happy Feet) did an amazing job with this film.  When I watched it again this week, the driving sequences still got my adrenaline going, especially the unforgettable and iconic shot of Wez (played by Vernon Wells) climbing over the hood of Max’s rig in the film’s key action sequence.  Cinematographer Dean Semler shot The Road Warrior in a 2.35:1 aspect ratio, and his photography makes the deserted red landscape more than just scenery, it’s a character in the film.  My DVD has the standard version as well as widescreen.  To watch this film in pan and scan is a crime.

Australian cinema was making a big impression on me at that time.  In addition to The Road Warrior there were quite a few Australian films that I love from the early 80’s, particularly Gallipoli, The Year of Living Dangerously, and Breaker Morant.  I also remember other lesser known Australian films such as The Odd Angry Shot and The Club playing in heavy rotation on cable TV back then.  In addition to George Miller, my favorite Australian directors are Bruce Beresford (Breaker Morant, Tender Mercies, Driving Miss Daisy) and Peter Weir (Gallipoli, Witness, Master and Commander: The Far Side of the World).  Miller’s directing career has incredible range, from action films (Mad Max, The Road Warrior, Mad Max: Beyond Thunderdome) to dramas (The Witches of Eastwick, Lorenzo’s Oil) to family films (Happy Feet, Happy Feet 2).

I’m looking forward to Mad Max 4: Fury Road (also directed by Miller), although to me it will be strange to see another actor (Tom Hardy, who plays Bane in The Dark Knight Rises) in the role of Mad Max.  There’s no doubt in my mind that it’ll be a high octane ride, but I truly hope that the film keeps the driving sequences as CGI free as possible.

I think The Road Warrior plays just as well now as it did in 1982.  The premise holds up today, the action scenes still pack a punch, and overall it doesn’t feel as dated as other films of the early 80s.  One small distraction was the film’s questionable wardrobe.  Luckily the collapse of civilization occurred after the last major shipment of American football shoulder pads, hockey masks and leather chaps to Australia.  The one thing about this film that makes me feel old is the fact that the actor that plays the Feral Kid (Emil Minty) is my age.  I have to stop looking up this stuff on IMDB…