Interview: Willem Dafoe on “The Hunter”

Willem Dafoe’s latest film The Hunter is one of three current releases for him along with Disney’s John Carter and the independent film 4:44 Last Day on Earth.  The Hunter, directed by Daniel Nettheim, tells the story of Martin David, a mercenary sent to the forests of Tasmania by a biotech company to hunt what is believed to be the extinct Tasmanian tiger.  As Martin scouts the terrain, he is drawn into a local conflict between loggers and environmentalists, and helps struggling mother Lucy Armstrong (played by Frances O’Connor) whose environmentalist husband has gone missing.  The film also co-stars Sam Neill (Jurassic Park, The Dish).

Dafoe met with the press for a round table interview on March 14 in New York to discuss the film, hunting, and his approach to acting.

Do you have a background as a hunter?

No, in fact when I was a kid – I grew up in Wisconsin, deer hunting is very big there – and during deer hunting season it was a father/son ritual that you would go out deer hunting.  And at the end of that weekend you would have that buck on the hood of your car and you’d go up and down the main drag beeping your horn.  It was really primitive.  My father didn’t hunt, and I would be the only boy in the class for about a week because it was such a part of the culture they would all get permission to leave for father/son bonding.  So I’d sit there with all the girls (laughs).  It was nice when I got older, you know?  (laughs)

Was that the week you decided to start acting?

What surprised you the most about filming in Tasmania?  And also could you compare and contrast your experience with working in the jungle to this movie and say a movie like Anti-Christ where you were actually being hunted.

In Tasmania, the weather was really volatile.  It could be snowing and really cold and two hours later it could be sunny and warm.  I mean, a lot had to do with elevation but we were moving around a lot.  So the weather was brutal and obviously, particularly for the sequences when I’m out in nature, I’m playing scenes with the weather, I’m playing scenes with nature.  It’s a powerful thing when you’re filming because you can’t control it so you have to be flexible and you have to invent things, and you have to know the story you want to tell, but you have to make adjustments all the time.  So it has all the energy and curiosity and problems of an expedition.  So I’m out there with a small crew, so on some level it kind of mirrors the hunt for the tiger.

I’ve been in the jungle a lot through the years and you know, jungles when you really get down to it, they’re all the same.  Nature gone wild.

In the spirit of your character, did you keep a distance between yourself and the children in the film (Morgana Davies and Finn Woodlock)?

Well, not so much on the set, but actually in the scenes because naturally they’re kind of sweet.  They’re actors, but they’re kids first.  And they don’t have – even though Morgana (Davies) the little girl has done some films and people really like her in films, it’s not like they have traditional actor skills of repeating things so when you’re playing these scenes, you’re tricking them into things and in that job you can get sucked into a sweetness.  And I just found myself feeling kind of a paternal urge happening, and I thought “Boy, we gotta nip any sentimentality in the bud.”  So I was very conscious of that.  You don’t want to muck it up, you know?  If you get too soft then the ending’s never gonna land. 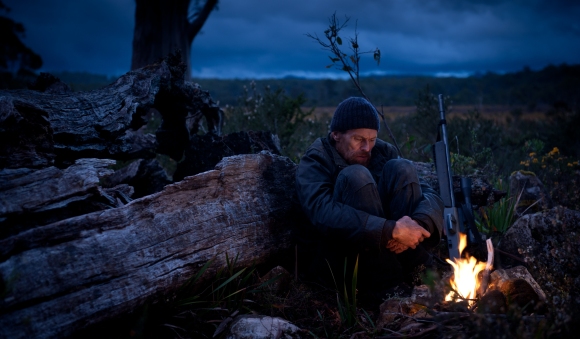 And when you were a cut off, isolated hunter with no human connection does that affect you when you’re not working?  Do you feel strange or different?  Or can you just shake it off at the end of the day?

The funny thing is I feel that as I get older I’m more affected by roles.  I used to say when the camera turns off the character goes back inside me.  But I feel like that’s less true.  In a role like this, all I’m doing is filming.  I’m working long days, and there’s nothing else.  I’m just doing very little besides that.  So of course, just by sheer immersion the character starts to haunt you and becomes you for a period of time.  Particularly when you’re working in a location where all your normal habits are broken and you have nothing to remind you of who you are normally, and we were working in quite remote areas.  So what I’m dealing with is I’m applying myself to a fiction in a funny way, and you’re inviting yourself to be flexible.  You’re inviting yourself to transformation.  So it can run really deep, but not in a scary way.

Does it take away the joy of being an actor?

No, that is the joy of being an actor.  I mean, the joy of being an actor is taking on someone else’s point of view and someone else’s circumstance, getting the shift of perspective.  That’s what I like about film in general is when they just by kind of learning or seeing something new, you go ‘Man, you know I never thought of it that way.’ Or you say “Oh, I always thought this was this, but it’s really this.”  As an actor you actively get to do that.  You have empirical evidence, it’s not just an intellectual shift of point of view.  It runs deep, you experience it.  And that’s a beautiful thing.

Magnolia Films’ The Hunter is currently in theaters.