From My Collection: “Unforgiven” by Rick Leonardi and Joe Rubinstein

In honor of Good Friday, I wanted to devote this post to a very special page in my comic art collection: page two from Brian Augustyn’s Unforgiven (2004, Metron Press) pencilled by Rick Leonardi and inked by Joe Rubinstein. 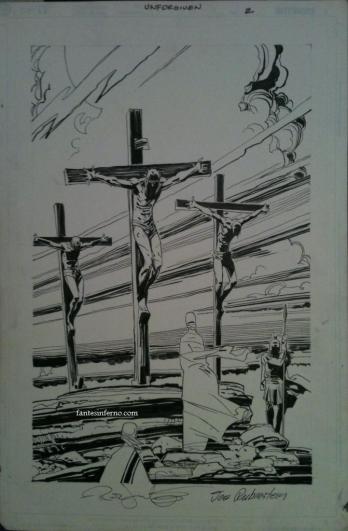 I love the combination of Rubinstein’s inks over Rick Leonardi’s pencils.  I’ve been a fan of their Marvel and DC work but I had never been aware of the religious themed Unforgiven comic book (with primary storyline penciled by Dick Giordano and inked by Terry Austin).

This amazing splash page depicts Christ on the cross, flanked by the two thieves (Dismas and Gestas according to the Gospel of Nicodemas).  I wish I could have seen Leonardi’s original pencils compared to the inked page.  Rubinstein’s line work on the wind, clouds and sunlight lends a sense of power and awe, but the simple lines depicting Mary looking up as her son is dying on the cross add another layer of emotion to the scene.  To the right, a Roman foot soldier leans against his spear as if he’s just passing the time until the condemned have died.  This is a perfectly composed page, and it’s one of my favorites in my collection.