In this episode we’ll take a look back at the first issue of Marvel Comics Micronauts that hit the spinner racks on September 19, 1978. 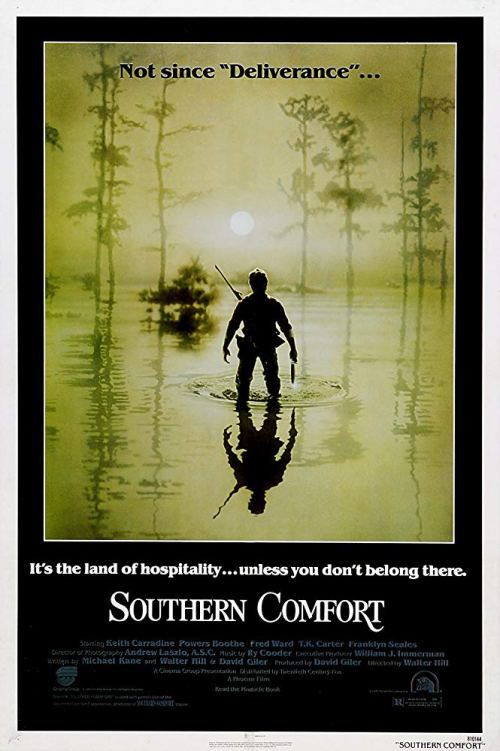 I love rediscovering an obscure film from the 80’s that still hits on all cylinders decades later.  When my family first got cable TV in 1981 it gave me exposure to quality (and some not so quality) films that I normally would not have been introduced to at our local cinemas.  Southern Comfort, directed by Walter Hill, is one of those great films that was easy to find on cable TV back then but became harder to find over the years.  With the film’s recent availability on Amazon Prime, it was time to revisit it.

Walter Hill is best known for The Warriors and 48 Hours, but his impressive list of films includes hard hitting dramas (Hard Times, The Driver), a beloved comedy (Brewster’s Millions), an action film (Red Heat) and less conventional dramas like the neo-noir Streets of Fire and blues themed Faustian tale Crossroads.  But the 1981 drama/thriller Southern Comfort is a solid film that inexplicably slipped through the cracks over time despite an engaging story and great cast.

The film begins in 1973 Louisiana.  Army National Guardsmen are on maneuvers in the bayou.  Captain Poole (played by Peter Coyote) assembles a squad of eight men for a standard recon mission.  Their morale is apathetic at best and it doesn’t get any better with arrival of Hardin (played by Powers Boothe), a transfer from Texas who wants to put in his time and get home to his wife.  Stuckey (played by Lewis Smith) tries to lighten the mood by firing blank rounds from his machine gun at Poole’s second-in-command Sergeant Casper (played by Les Lannom), which shows the amount of respect they have for him (and also makes a viewer wonder why the surrounding troops didn’t respond to it as a threat – my one caveat with the film).  Spencer (Keith Carradine) boosts the men’s motivation when he tells them he has hired several prostitutes to wait for them at a rendezvous point at the end of their recon mission.

Several hours into the recon mission Captain Poole realizes their course has been blocked by a river that rose with the winter rains.  Their choice is to continue forward to find their rendezvous point or backtrack to base and start the recon all over again.  At a trapping post, faced with a river they are unable to cross and the entertainment waiting for them at their eventual rendezvous point, they “requisition” three canoes from local trappers who aren’t around to give permission.  At the suggestion of straight laced high school coach Bowden (played by Alan Autry but credited as Carlos Brown), the squad leaves one canoe behind with a note explaining where they will find the other canoes.  But despite the soldiers’ best intentions the trappers are not happy with a group of outsiders interfering with their property.

The group is halfway across the river when the French speaking Cajun trappers angrily make their presence known.  Reece (played by Fred Ward) manages to get a few rude words out in French.  Poole attempts to explain they’ll get their canoes back, but the situation spirals out of control when joker Stuckey fires a couple of dozen blank rounds at them.  The trappers, unaware they are blanks, return fire and shoot Poole in the head, killing him.  Leaderless and lost, the guardsmen now need to survive in unfamiliar territory without live ammunition.

Fear and infighting within the group set in.  Spencer reveals that Reese has his own box of live ammunition.  Casper orders him to turn it over to distribute among the squad but Reese is more than willing to give Casper a bullet to the head to keep his stash.  Hardin sneaks up behind Reese with a knife to his throat and the bullets are turned over.  Casper does his best to keep order and lead the squad, but despite his experience and knowledge of military procedure, he’s unable to command the respect of the men.

The next day they find the trappers cabin and capture the only inhabitant, a one-armed trapper (Brion James).  But the group has different ideas as to how their new prisoner should be treated.  After Simms (played by Franklyn Seales) cracks him across the jaw he’s unwilling to talk.  Bowden’s composure erodes and he’s hellbent on payback.  Oblivious to the supplies they could have collected, he sets the trapper’s cabin on fire and nearly kills all of them when a storage of dynamite goes off.  With even less live ammunition they continue through the bayou dragging both a prisoner and Poole’s lifeless body.  They can’t find the highway and they take it as a morbid sign when they encounter eight dead rabbits (one for each of them) hanging in their path.

Without a compass, Spencer and Casper disagree over which direction to go.  As they attempt to get their bearings, a group of hunting dogs attack them with Stuckey and Cribbs (played by T.K. Carter) getting the worst of it.  The squad is now the hunted, descending into fear, despair and paranoia with each deadly trap they encounter.  When they’re not feeling the presence of their hunters, the squad begins to turn on itself.  Bowden cracks and is tied up so as not to become a danger to himself and the squad.  Reese tries his own methods of interrogation on their prisoner which leads to a knife-wielding showdown with Hardin.  With no end to their ordeal in sight, Casper’s quoting of the manual finally turns the men against him and they follow Spencer.

No spoilers here.  Walter Hill’s direction and cinematographer Andrew Laszlo’s photography of the bayou puts the audience right in the middle of the squad’s nightmare.  It’s the portrayal of the “local’s” desire to protect their land and way of life that effectively brings out the growing fear and desperation of the guardsmen (a few shots are not for the squeamish).  It’s too easy to compare Southern Comfort to the critically acclaimed Deliverance (unfortunately even the film’s poster is guilty of this), but Southern Comfort stands on its own as a powerful psychological drama that keeps the audience engaged to the very end.

Southern Comfort is available on DVD and Blu-Ray on Amazon.  As an Amazon Affiliate, I earn from qualifying purchases.  Thank you for your support!

Written and Created by Vito Delsante; Art by Giancarlo Caracuzzo

When my brother and I started collecting comics back in the 70’s, our early collection included titles such as G.I. Combat, Sgt. Rock and Weird War Tales.  Those titles made up half of our comic book purchases each month, and we enjoyed them as much as any superhero comic back then.

It was around that time that we took our first family trip to Italy, which included a visit to the Abbey of Monte Cassino, one of the hard fought battlegrounds during the Italian campaign of World War II and a stone’s throw from our family’s hometown.  Over the years we’ve heard countless stories from our relatives who lived through the war in Italy during those years.

And so began our interest, if not obsession, with World War II.

In recent years I picked up as many war themed comics as I could find, but in my opinion there still weren’t enough.  Then I picked up a copy of Vito Delsante and Giancarlo Caracuzzo’s World War Mob #1 (of a four issue mini-series).  When I saw the cover  with Benito Mussolini in the crosshairs (by artist Mike Manomivibul), I was intrigued.  When I finished the first issue, I was hooked. 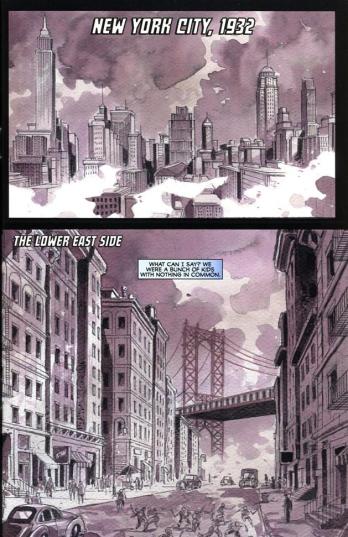 The story begins in New York City’s Lower East Side in 1932.  A teenage Vincenzo Di Greco works his way up from street gang leader  protecting his turf to footsoldier for mobster Lucky Luciano.  He’s got a heart of stone and isn’t afraid to shed blood when necessary, which makes him, in his own words, a good soldier.  Delsante’s words and dialogue bring out the fire in Di Greco’s heart, and artist Giancarlo Caracuzzo’s doesn’t hold back when representing Di Greco’s neighborhood and his bloody handywork in World War Mob’s beautifully drawn and watercolored pages. 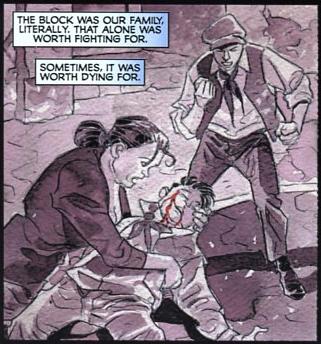 Cut to December of 1944.  Di Greco, now a captain in the U.S. Army, leads a squad through the snow of the Ardennes against the German army.  He’s not afraid to “bring the fight to them” as his squad takes out a German gun post.  Two months later, while on leave for some R&R in Sicily, he’s handed a note that leads him to an empty bar and face to face with New York mobster Meyer Lansky flanked by two GI’s as his personal security detail.

Lansky gets to the point: Lucky Luciano wants Benito Mussolini assassinated and he’s in Sicily to recruit Vincent.  As they speak, four other representatives of the Five Families have traveled to Europe to recruit the other soldiers that will take part in the mission, one from each family.  Vincent looks over the list of his fellow recruits and spots a name from his past: Victor Santi of the Mangano crime family.  They have a history, and now they’ll be forced to work together to assassinate il Duce against incredible odds.  They’ve been given their orders (kill Mussolini or don’t come home), but they have to figure out a plan on the fly.  Their first problem: they’ll need to go AWOL to carry out the mission.

Reviews of World War Mob will make their share of comparisons with mafia/war movie combinations like Goodfellas meets The Dirty Dozen or comparable movies of those genres, but those comparisons are unnecessary because World War Mob is a great comic book with a story that stands on its own.  My only disappointment is that World War Mob is a four issue mini-series and I wish it was ongoing.  Once I finished the last panel of the last page, I started counting the weeks to the next issue.  Can’t wait for issue #2.