An Eisner Afternoon At The Society of Illustrators

Will Eisner: The Centennial Celebration 1917-2017 at the Society of Illustrators in New York

My first introduction to Will Eisner’s work was sometime in the mid-80s with reprints of his later Spirit stories, but my true appreciation for his art and stories developed late in my comic book reading years.  I had been out of reading and collecting comics for about ten years when I began to seek out his work in the mid 2000s, first with his 1940s Spirit strips, then his graphic novels A Contract with God, The Dreamer and Last Day In Vietnam.  Eisner quickly became one of my favorite comic artists, primarily for his groundbreaking splash pages, film noir inspired use of light and dark, and beautifully inked lines.  By that point I wanted to learn as much as I could about his art and career and quickly began to catch up with his books Comics and Sequential Art, Graphic Storytelling and Visual Narrative, and Shop Talk.  Just as I was making up for lost time, looking forward to his next graphic novel and hoping to one day meet him at a local comic con, he passed away in January 2005.

This year would have been Eisner’s 100th, and the Society of Illustrators in New York marked the occasion with their latest exhibit Will Eisner: The Centennial Celebration 1917-2017, an exhibition of Eisner’s original artwork that spans from his Eisner & Iger Studio stories, 1940s Spirit strips, and his later graphic novels to his final work The Plot: The Secret Story of The Protocols of the Elders of Zion.

I had seen several of Eisner’s original pages at The Jewish Museum’s Masters of American Comics exhibition in 2006, and while it was an incredible exhibit of comic book art, I remember thinking (in my humble opinion) that Eisner was under represented in that show.  So when the Society of Illustrators announced they would be honoring Will Eisner with this exhibition, I knew this would be one of the best opportunities for me to see a wider range of his work including some original 1940s Spirit pages.  It didn’t disappoint.

Will Eisner: The Centennial Celebration at the Society of Illustrators in New York

The exhibition takes up two floors of the Society’s building, with the main floor showcasing Spirit pages from the 40’s to the 70’s.  The boldly colored print of Spirit character P’Gell grabbed my attention as soon as I walked in (pictured above), but it was the original art I was there to see and I quickly made my way to the April 27, 1941 Spirit strip drawn by Eisner.  It’s amazing to see the progression from his early drawing style to the classic The Spirit art of the late 40s as you work your way across the first wall of the exhibit.  Eisner’s line work is bolder and more fluid in the 1947 original Spirit pages on display, which include several splash pages that showcase The Spirit’s logo.

It’s one thing to appreciate the final colored and lettered art of The Spirit comic strips, but seeing Eisner’s original hand drawn artwork (even the early pages browned from the paper’s acidity and splashed with white correction fluid) takes it to another level of appreciation.  The Spirit pages on display tell a deeper story with the unerased pencil lines, blueline notes and white opaque paint that show elements of Eisner’s artistic process.  I was so drawn to the original art on display when I first walked into the exhibit that I completely missed several of Eisner’s personal items that were displayed in the room.  Eisner’s drawing board, as it was left at the time of his 2005 passing, as well as several of his used brushes, inking nibs and pages of a Jules Feiffer unpublished script for The Spirit. 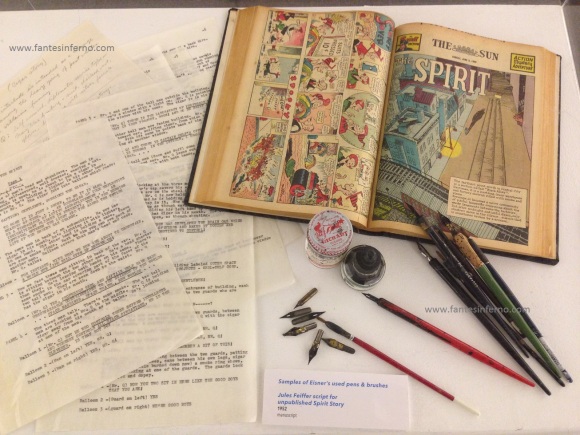 Will Eisner’s artist tools and a Spirit script by Jules Feiffer at the Society of Illustrators in New York.

The exhibit continues in the basement with original art, including rough layouts, mostly of his later works.  But two Smash Comics pages from the Eisner and Iger Studio (#6 from 1939 and #8 from 1940) and a 1936 oil painting from his teenage years were a nice surprise.  The layouts of the Smash Comics pages were straightforward and simple compared to Eisner’s later works, but each page had one panel that was drawn with a more dramatic angle than the others that foreshadowed the cinematic style that he would be known for with The Spirit.  His later works on display include pages from A Contract With God, Dropsie Avenue and Last Day in Vietnam.

Will Eisner exhibit at the Society of Illustrators in New York.

From beginning to end, the Society of Illustrator’s Will Eisner: The Centennial Celebration 1917-2017 is a strong representation of Eisner’s work.  But my afternoon at the Society of Illustrators didn’t end there.  Other works of art by the greats (a Steve Canyon strip by Milton Caniff and paintings by Leyendecker) lead to the second floor exhibit Heroes of the Comics by Drew Friedman.

Will Eisner: The Centennial Celebration 1917-2017 ends on Saturday June 3rd and I highly recommend it for fans of Eisner’s work and anyone who appreciates the medium of graphic novels.  This exhibition will be followed by The Art of Spider-Man beginning on June 6th.