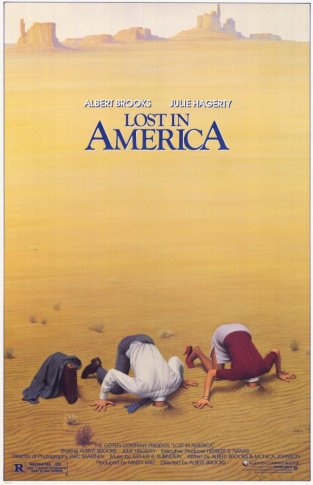 Albert Brooks’ 1985 comedy Lost In America is a film that I’ve been looking forward to revisiting for awhile now.  I’d seen it on cable TV back in the late 80’s and while I enjoyed it, I realize now that a lot of the humor was lost on me at the time.  As a teenager I wasn’t able to fully understand or empathize with Albert Brooks’ and Julie Hagerty’s characters reasons for dropping out of the corporate world and their eventual plight on the road to start their new lives.  Revisiting this film almost 25 years later allowed me to enjoy it on a new level.

The movie begins with David Howard (played by Brooks) unable to sleep as he second guesses the decision to sell his house after it’s already closed.  He’s talked down by his patient wife Linda (played by Hagerty) but once she’s convinced him it was the right decision he begins to overthink whether their new house was the right one to buy.  The next day David’s commitment/decision making issues continue at work when he calls the Mercedes dealership for the umpteenth time before finally making the decision to order his new car.  He meets with his boss expecting to get a promotion to Senior Vice President, only to find out the agency gave the promotion to a less qualified employee and David is being transferred to the New York office to work on the Ford campaign.  He doesn’t take the news well, curses out his boss, quits/gets fired, and storms out before he can be thrown out by security.

David bursts into Linda’s office and convinces her to quit her job and drop out of the corporate life with him.  That night they look up property listings in the East and decide to cash out and leave Los Angeles to drive across America and live off of their nest egg like Easy Rider.  Their quest to find freedom on the road is not without sacrifice of comfort: instead of motorcycles they get a top of the line Winnebago (complete with a microwave that includes a browning setting that David can’t stop raving about).  They stop in Las Vegas on the first night of their new lives and while David would prefer to spend the night in a trailer park, Linda convinces him to splurge on a hotel room and enjoy themselves for a night.  It starts off on the wrong foot when they’re forced to grease the manager’s palm for the only available room (a junior bridal suite with two heart shaped twin beds), but only gets worse when David wakes up the next morning with no sign of Linda.

He finds her in the casino frazzled on an adrenaline rush and at the tail end of an all night losing streak at the roulette table.  He’s advised by the casino manager (played brilliantly by Garry Marshall) that she’s seriously in the hole, and when he is finally able to pull Linda away from the table he finds out she apparently has a latent gambling addiction and she’s lost almost all of their $100,000 nest egg in a matter of hours.  The best scene in the film is David’s sincere yet hopeless attempt to get the casino to give them their money back.  With barely $1,000 of their nest egg left, they’re forced to stop in a sleepy Arizona town and find any job they can get.

As a 40-something with a mortgage and 20+ years in the corporate world, I can now empathize with the sentiment (and folly) of David and Linda’s quest for freedom.  The story isn’t preachy about dropping out or making a statement about 80’s excess, it’s about two people that make a wrong turn in their journey and have to dig themselves out of a hole.

For me the humor comes from the sense of irony that David and Linda didn’t throw caution to the wind, give their money away and try to live off the grid.  They know from the very beginning that the one thing they’ll need to start their new life is money.  What makes the story effective is that they’re doing everything right and it still blows up in their faces.  Even the plan to quit their jobs is planned according to their finances, it’s only an impromptu night in Las Vegas and a latent gambling addiction that knocks them off course.  No excuses, no corporate enemy, just personal responsibility and starting over.  Brooks and Hagerty have great chemistry as each unexpected bump in the road tests their marriage and their plan for a new life.  Brooks drags out their plight so effectively the audience forgets they’re only several days into their journey.  This film is a gem.