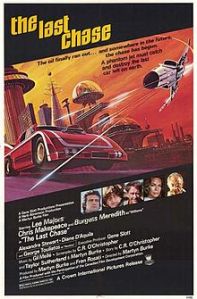 I’ve always been a fan of dystopian films with classics like Blade Runner, Red Dawn, 12 Monkeys, Escape From New York, The Road Warrior and Children of Men topping my list of favorites.  I’ve enjoyed many other examples of the genre over the years, but when Martyn Burke’s The Last Chase fell on to my cinematic radar recently, my faint memories of this 1981 film may have pre-qualified it for the “guilty pleasure” category.  I’d been a fan of Lee Majors since The Six Million Dollar Man aired on TV in the 70’s, and I remember enjoying The Last Chase enough to watch it repeatedly back when it was in heavy rotation on cable TV, but I knew going into this latest screening that my memory of the film may not live up to the reality of how it would hold up 35 years later.  So I went into The Last Chase for a fun ride and a little nostalgia but surprisingly, despite the film’s age and several dated elements, I found the film very engaging today.

The film begins with a Porsche race car pulling up to a racetrack, out of gas. Former racer Frank Hart (Lee Majors) tries to fill up his car, but the pumps are locked. The track is abandoned save for Fetch, an old track employee, who tells Hart there’s no more gas to be had and other basic supplies are starting to run low. Hart breaks open the pump, siphons out what little gas he can get for his station wagon and tows his racer home, the only driver on the empty highway.  All cars have been made illegal and had to be turned into the government a week earlier. But Hart is in no hurry to obey any orders.

Harts career ended in the 80’s after losing control in a race that led to a fatal accident between two fellow drivers. An epidemic from an unknown source struck the U.S. and Hart’s wife and son succumbed. Field hospitals are overcrowded, oil supplies have been cut off, and Martial Law is in effect to control a population still suffering from the epidemic. But as Hart says in his opening monologue, “those of us that survived learned to cope with changes.”

Twenty years later Hart works as a spokesman pushing propaganda for the mass transit authority of now auto-less Boston, living a quiet life among the obedient workers in a totalitarian system that runs counter to his personal nature and the America he knew. He’s been surveilled by the government for his difficulty adjusting to the new system and is brought in for questioning by local authorities. His non-conformist attitude doesn’t earn him any points with high level bureaucrat Santana (played by Diane D’Aquila) who doesn’t have patience for a free spirit stuck in the old days. His scavenging car parts from confiscation yards and several accrued offenses makes him automatically scheduled for a hearing and possible sentence to a rehabilitation center, the system’s new name for prison. When faced with this threat, Hart coolly replies, “Lady, you’ve too goddamn many laws.”

Adding to Santana’s frustrations, her department’s computer system is hacked by prep school student Ring (played by Chris Makepeace). Ring is also an outsider that has trouble conforming to the social hierarchy of his school. He is ostracized and bullied by his fellow students but gets even by using his expertise in chemistry to set off homemade explosives on campus. When he’s not causing mayhem on campus, he sneaks away to a computer he has hidden in the attic of his dorm to hack into the government grid.

Back home, as Hart replays the video of his racing accident just to see a clip of his late wife, a broadcast from Radio Free California (an independent “free” territory) breaks into the TV feed, telling citizens that the residents of California have “returned to the land” and to their machines to escape from the oppressive regime that now controls America. This inspires Hart to break out the race car that’s been buried in pieces under his garage, working at the transportation authority by day and assembling it at night with one week to go before his trial.

Fed up with the propaganda he’s been forced to feed young audiences (“like a reformed sinner preaching to the congregation”) and the system that put him there, Hart turns tide during a speech to a group of prep school students and extols the virtues of cars, freedom and private ownership. His impromptu speech catches the attention of Ring, who sends Hart a direct message to his home that he is not alone. Hart is subsequently suspended from his position at the transportation authority with jail time very likely for his offense.

That night, as Hart looks over an old road atlas in his home, he catches Ring breaking in. When the police show up moments later, Hart assumes it’s to arrest him for his imminent trial, but they’re actually trying to track down the runaway Ring, who’s third attempt at hacking Santana’s department computer was traced back to his boarding school.  Hart covers for Ring and the police leave, but he makes a critical error when he benignly tells the officers he was waiting for his family to come home. When Santana reviews the police report moments later, she catches this irregularity and orders the police back to Hart’s home to arrest him.

With the police pounding on his door, Hart fires up the racer to hit the road to Free California, but Ring jammed the garage door opener to strong arm Hart into taking him along. Desperate to get out before the police can stop him, Hart agrees to let Ring join him on the escape. The police set up a barricade blocking Hart’s route on the outskirts of Boston, but he outflanks them by taking a long unused hidden tunnel out of the city and the police golf carts can’t catch him.

Word of Hart’s escape in an illegal race car quickly reaches Washington, and Hawkins (played by George Touliatos) is dispatched to oversee how Santana’s bureau handles his capture. Calm and collected with an eerie confidence, Hawkins draws on his old school experience and quickly begins calling the shots over the unprepared Santana. She naively believes that they will easily capture Hart once the car runs out of gas. But Hawkins politely explains that the car will not run out of gas because all old gas stations have underground tanks in which there are two to three inches of gasoline the internal pumps could not reach. With a special pump (which was established in the opening scene of the film) Hart would be able to siphon enough gas for the 3000 mile race to California.

Hawkins tasks Santana’s assistant Morely (played by Ben Gordon) with tracking down former Korean and Vietnam War jet pilot J.G. Williams to convince him to fly again in an attempt at neutralizing Hart.  Morely finds Williams (played by Burgess Meredith) in a modest apartment divorced, depressed and drinking.  A former highly decorated Air Force pilot still stinging from the abuse he received upon his return from Vietnam, Williams’ skepticism is heightened with the words “Your government needs you.” But Morely’s offer to have him fly a jet fighter again makes him put down his whiskey bottle and return to active duty for the first time in over forty years. After restoring an old F-86 jet fighter, Williams takes to the skies and the chase is on.

No spoilers here. I revisited The Last Chase as a result of the faint memory of watching it several times on cable TV around 1982-1983. There was nothing specific to the film or its message that drew me to it recently, just simple curiosity.  The film’s message of “eco-totalitarianism” and the loss of individual freedom was lost on me back then, it was simply a chase film to me.  While some might judge the film today as ham-fisted propaganda (its message would resonate loudly today with a Libertarian audience), as a dystopian film it works to solid effect.  The computers were crude by today’s standards, but they were used to good enough effect in the film because the idea behind what they were capable of (local police camera surveillance, satellite surveillance) are more believable today vs. 1981 because of the extent to which we now have surveillance technology in use. Ironically, even with the dated representation of Santana’s surveillance system, today’s audience would be more accepting of this story element.

Lee Majors vs. Burgess Meredith.  Race car vs. jet fighter.  Liberty vs. totalitarianism.  I’m glad I rediscovered The Last Chase.  The film’s opening scenes are a little clunky, especially with the unnecessary voice over, and there are a couple of scenes where a fair amount of suspension of disbelief is necessary.  But 35 years later I still enjoyed the film and have a greater appreciation for the story and the cast (Diane D’Aquila and George Touliatos are particularly good).  It’s easy to unfairly judge the film on some of the more dated elements, but overall The Last Chase is a fun ride.