The Summer of ’82: Conan the Barbarian

Fante’s Inferno is revisiting the summer of 1982, considered to be the greatest movie summer for fantasy and sci-fi fans. 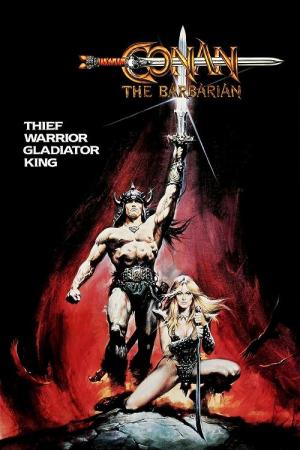 Famous quote:  When asked “What is best in life?”  Conan responds: “To crush your enemies, see them driven before you, and to hear the lamentation of the women.”

The film begins with a blacksmith forging a sword…

I always loved that opening sequence.  The art of creating the weapon got me hooked on the story at age 10, and watching it this week at age 40 reminded me why.  At that point in my young life I was feeding myself a steady diet of fantasy books, Dungeons & Dragons, and Frank Frazetta’s artwork.

This isn’t a review, per se.  One thing I can’t bring myself to do with this film, or most others I enjoyed in my youth, is look at them with the jaded snarkiness that most other people would approach the film with in 2012.  I won’t judge the film by the primitive effects by today’s standards, the acting ability of Arnold at that point in his career, or whether or not I outgrew the film/genre as I got older.  For me, it comes down to these points:

1. Does watching it now remind me of why I enjoyed it back then?
2. Does the story still hold up for me?
3. Does the film reinforce what I like about the genre?

And so, how did it hold up for me when I watched it 30 years later?  Much better than I thought.  Although the special effects (or lack of special effects) would come across as dated by today’s standards, I actually enjoyed it more for that reason.  I prefer the old school approach on 35mm over today’s CGI overload.  If done today, the number of Thulsa Doom’s attackers in the opening raid of Conan’s village might ave been multiplied by 100 and the “real” actors might have been filmed against a green screen.  While I appreciate the progress that has been made with CGI (I’m not a luddite), and a filmmaker’s desire to create a landscape with these tools, regardless of how well it’s done it’s still a distraction to me as a viewer (although one CGI film that I thoroughly enjoyed was Sky Captain and the World of Tomorrow).  I will always have an appreciation for the lost art of the matte painting.

If there was anything I would criticize about Conan the Barbarian, it would be the slow pace of the film.  Clocking in at 2 hours and 7 minutes, a half an hour could have been cut just by picking up the pace in many of the scenes.

One thing I didn’t realize was how little dialogue Arnold had throughout the film, unless you count the 87 times he said AAAGHaaghAAAGHaaAGH!!!! when tortured or beaten.

Seeing the final shot of an older, wiser, King Conan on his throne at the end of the film and reading the final lines on the screen reminded me of how I couldn’t wait for the sequel back then.  Two years later my childhood friend Kevin and I saw Conan the Destroyer in the theater.  Even at age 12, the fantasy/D&D fan in me didn’t take the story as seriously as Conan the Barbarian.

This film was like an old Dungeons & Dragons campaign on celluloid.  Two swords up.